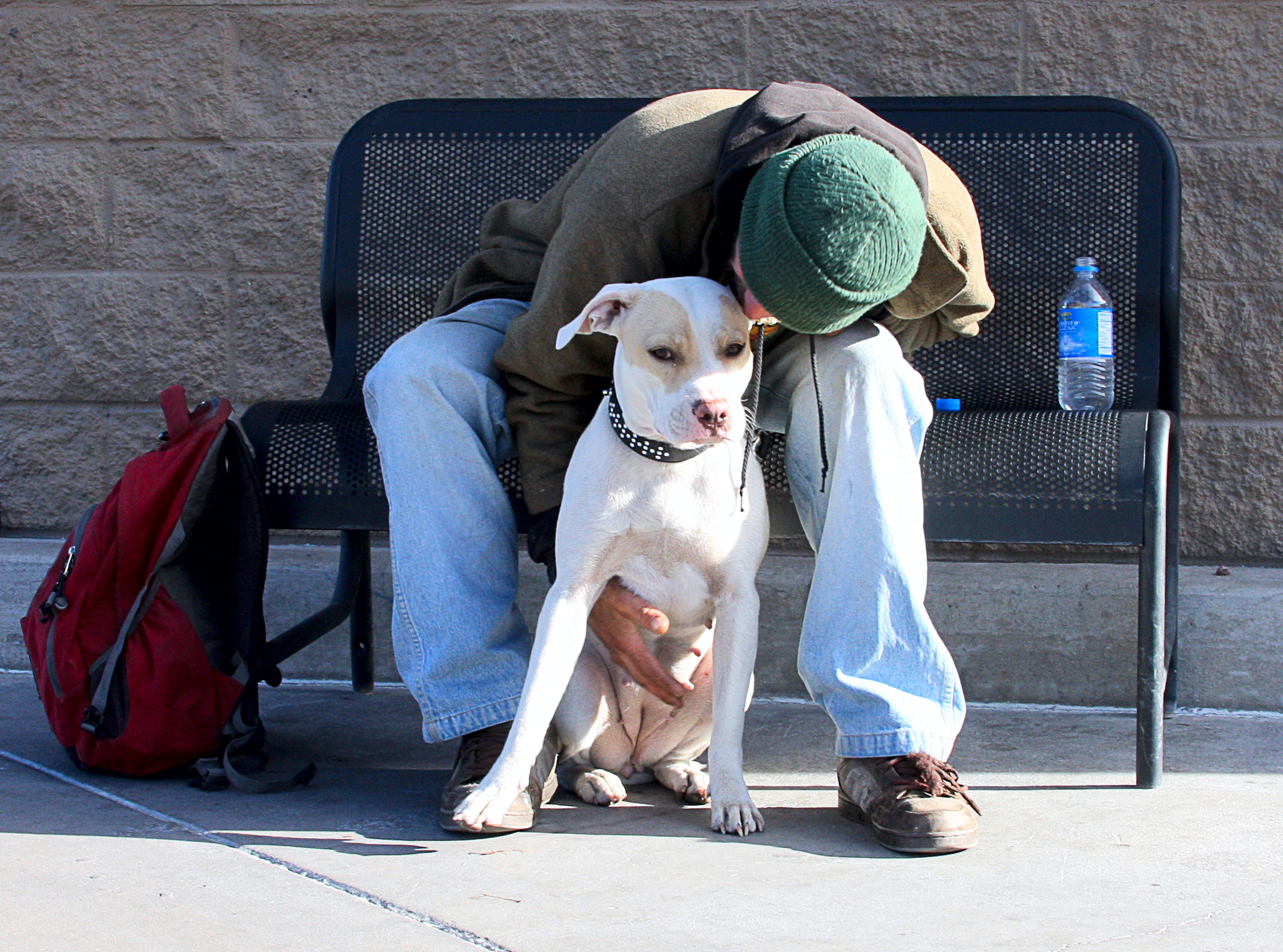 Shortly after Dave and I moved to New Mexico, I began noticing how many of the homeless people here have pets with them.  There’s a mission here in town that we visited about six weeks after we arrived.  They have a food kitchen, and we wanted to take some donations there for Thanksgiving dinner.  Next to the food kitchen was an office where people needing work could sign up to be helped.  And outside, along with all the downhearted, poverty stricken people, were their pets.

A few weeks after that, we were exploring a new part of town, looking for a particular store in a strip center, when a homeless man walked by carrying a guitar…and at his feet walked a perky little puppy, head held high–just like any other dog, happy to be walking at his master’s side.

Most recently, Dave and I went to the local farm coop store where we buy our humanely produced meats and organic produce.  Outside on that particular day, enjoying the warm February weather, was a homeless man and his two dogs. 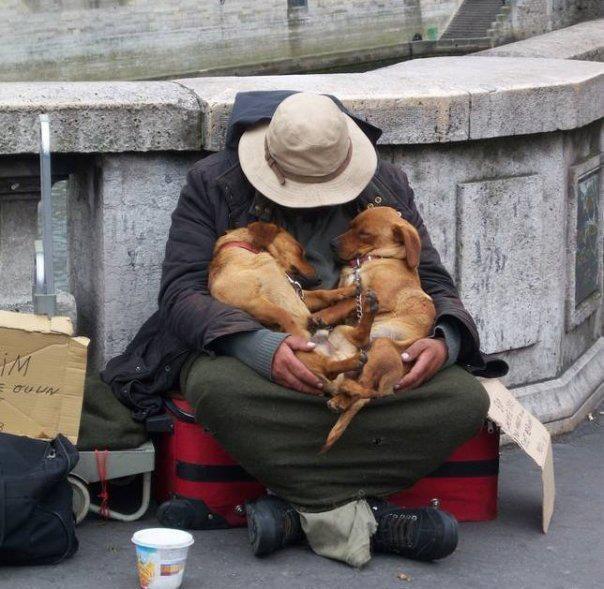 Why Do Homeless People Have Pets?

We’ve all read the stories of, and some of us may even personally know, people that had children hoping to be loved.  Then the children went on to betray or disappoint the parents.  In some cases the children are even abused or neglected–all because human beings seldom are able to fulfill the expectations others set for them–love not withstanding.

But the love of a pet doesn’t work that way.  Without judgement or agenda, against all odds and reason, they simply love.  And for the homeless, this may be needed most of all. 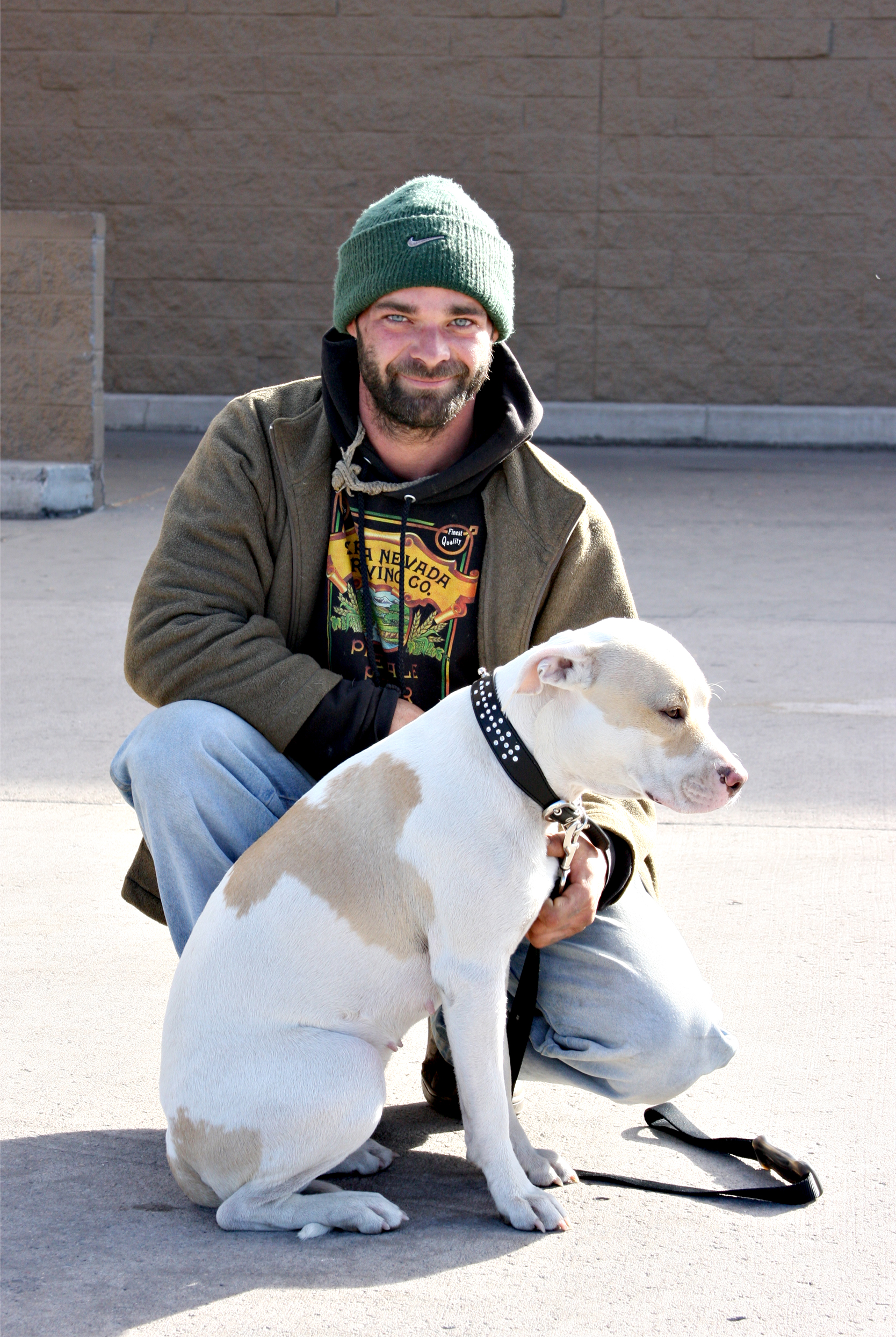 Meet Chris and Brandy. Chris is very protective of his pet, since a previous dog was taken by Animal Control because she was unlicensed.

Where Do The Homeless Come From?

I saw an interview once with Neale Donald Walsch, the author of the Conversations With God series.  In it, he revealed that he had spent a year on the street as a homeless person.

Before, Walsch worked variously as a radio station program director, newspaper managing editor, and in marketing and public relations. In the early 1990s he suffered a series of crushing blows—a fire that destroyed all of his belongings, the break-up of his marriage, and a car accident that left him with a broken neck. Once recovered, but alone and unemployed, he was forced to live in a tent in Jackson Hot Springs, just outside Ashland, Oregon, collecting and recycling aluminium cans in order to eat. At the time, he thought his life had come to an end.

When asked why he hadn’t turned to his children for help, he replied that there were two reasons: 1) he thought every day would be his last and 2) he was too ashamed.  He went on to add:

“Don’t pass anybody on the street,” Neale says. “We’ve all got a quarter or a dime or a dollar or a fiver, that we can let go of. And you can make somebody’s whole day with 50 cents or a dollar. So try never, ever, ever to pass anybody in need. When you see them holding up the sign, ‘Will Work for Food’ or when they walk up and ask for a little bit, share. Share. If you see somebody on the street who’s got his hand out, try to get off your judgment and be generous.”

What’s important to remember is that in a world where one missed paycheck, an abusive spouse or a serious medical condition can put someone out of their home, not every homeless person is dangerous or lazy. 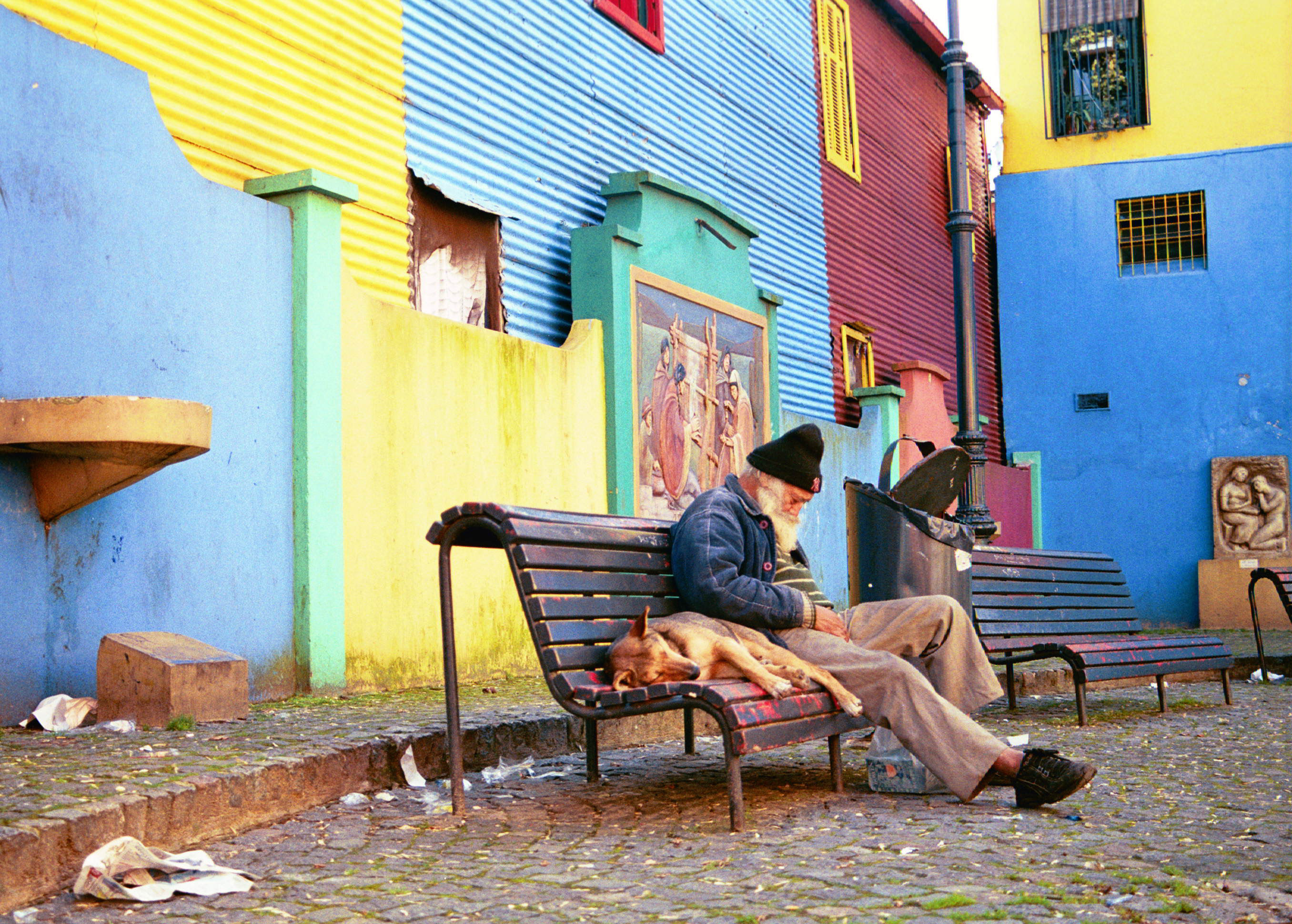 How Many Homeless With Pets Are There?

The National Coalition for the Homeless estimates that between 5%-10% of homeless people have dogs and/or cats.  It could be more like 25% in rural areas.  These numbers may differ across the country due to a number of factors: weather, the local economy, and the cost of living. 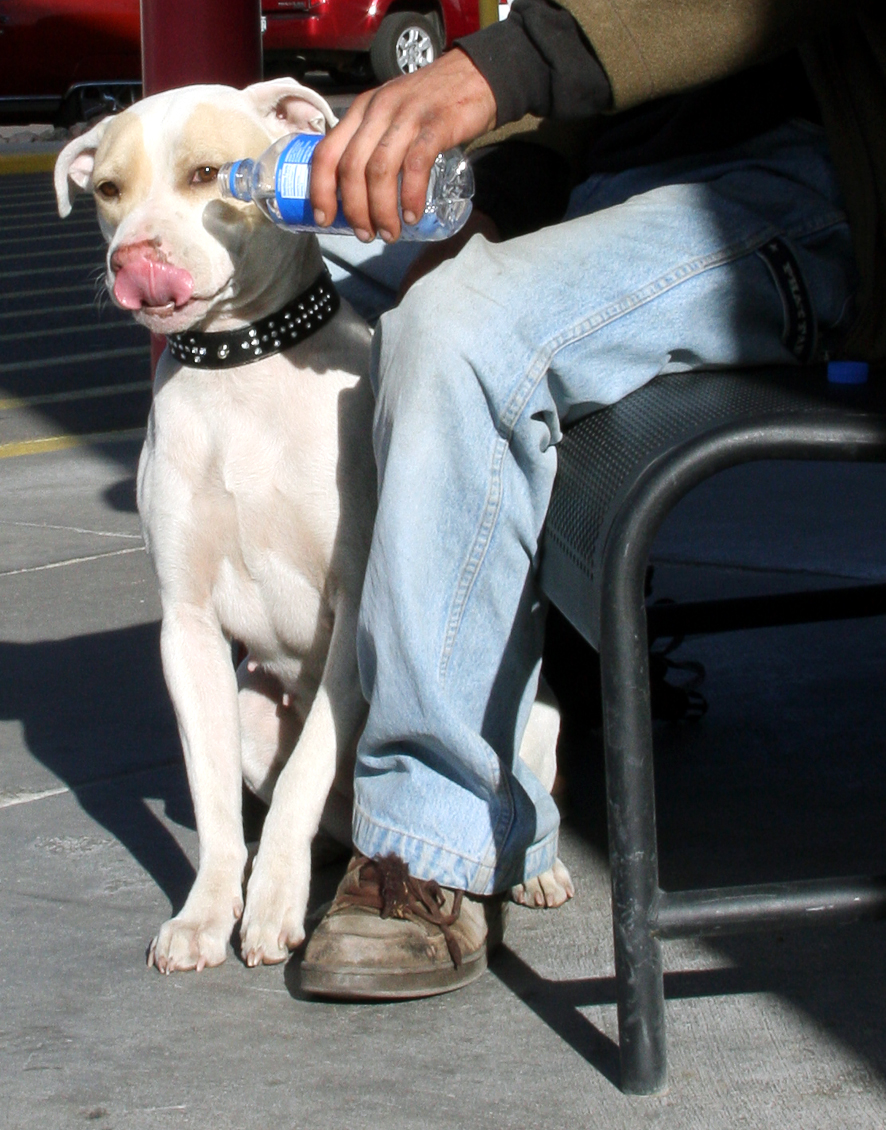 How Can The Homeless With Pets Care For Them?

When I saw the man at the shopping center, though, the first thing that struck me was how the dog didn’t know its dire situation.  He just pranced along in the sunlight, happy to go wherever his man went.  But I wondered for a long time after we gave him money for food, how the man would prevent fleas or heartworm for this wee puppy.  What would he do if the dog were injured?

Even the kindest benefactor often won’t approach a homeless person on the street to offer help for their pet.  And many homeless are fearful if they accept, their pet will be taken away from them.  Often, their pets are the only comfort they have, and their only link to reality. 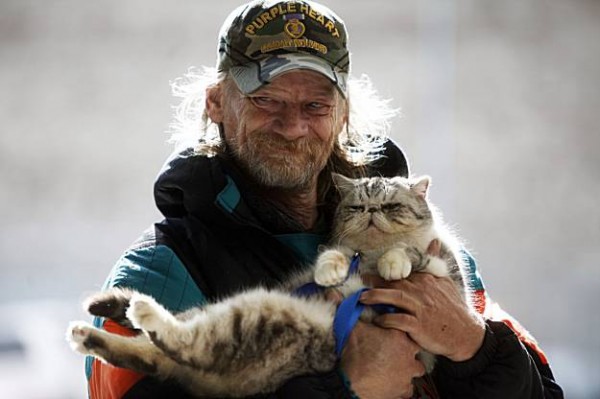 Luckily, there are organizations that can help.  Chief of these is Feeding Pets Of The Homeless. They are a nonprofit volunteer organization that provides pet food and veterinary care to the homeless with pets in local communities across the United States and Canada.  For us here in Las Cruces, New Mexico, the local agency that distributes food and medical care for pets of the homeless is Action Programs for Animals, whom we have worked with in the past and plan to again in future.

Here’s a video about their important work:

Many of our readers follow us from Albuquerque and our home town of Cincinnati, Ohio.  There, you can contact these local distribution centers:

If your city isn’t listed here, Feeding Pets Of The Homeless has an awesome search feature on their website. 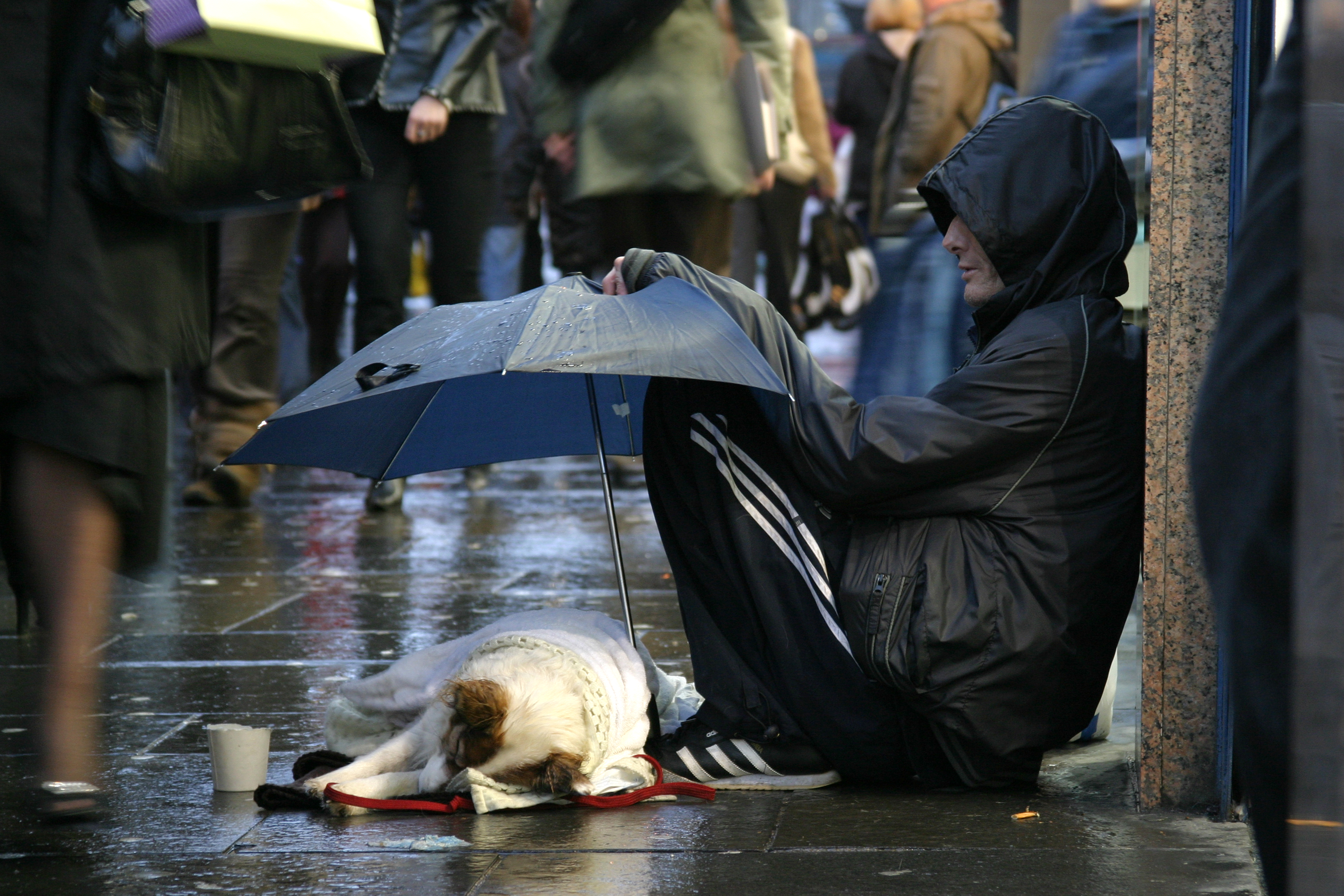 Shelter for the homeless with pets is somewhat more problematical.  However, if you are homeless due to domestic violence, you can contact:

Another Resource for The Homeless

Word of mouth travels quickly in homeless communities.  Once a food bank or soup kitchen starts distributing pet food, they come.  Some find out about the programs through the websites by accessing the internet at public libraries.

It is our sincere hope that someone reading this post finds the answers they seek here.