The West Side Highway Rats

In July of last year, hundreds of domestic white rats were dumped on the median of the West Side Highway in New York City. Surrounded by heavy traffic, with no access to food or water, these domestic rats had little hope of survival. A team of dedicated animal lovers quickly jumped in to save them. Planning capture missions and eventually “rat trains,” over 500 saved rats were transferred to several rescue organizations along the east coast from New York, all the way down to Virginia.

The city was less than helpful in this rescue, putting down poison and capturing (then killing) at least 300 rats from the median. No officials offered to investigate the situation and none have since reached out to help seek justice for these sweet refugees. (That I am aware of.) Many of the rats rescued after the poisoning did not survive, some dying by the dozens within days of each other. Some finally finding a loving (if temporary) home with a rescue organization. A majority of the rescued rats did survive however, and began to find comfort and new hope for life with people that cared for them. 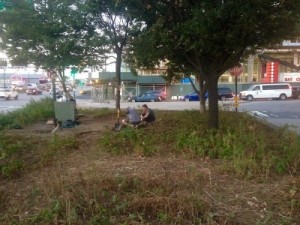 Our family lives in North Carolina and was desperate to help however, we were unable to make the long trip, or be of any use until we got notice of the east coast rat train that transported these sweet, unfortunate rats, south. Overjoyed at the opportunity to finally help out, we almost volunteered to transport and adopt some of these rats ourselves. Sadly, we knew we had one male who would not take kindly to strangers entering his home and we had to make the hard decision to not introduce new rats into our current mischief. Though we ended up making the hard choice to watch the West Side Highway rats from afar, I did end up randomly connecting to one through my work here at Your Pet Space.

Last year, I shared the story of Toby, the white rat who had become a star on Broadway in, “The Curious Incident of a Dog in the Night-Time.” Her trainer, Lydia DesRoche, adopted three of those highway rats, named Blanche, Dorothy and Rose. One of these “Golden Girls” would later get her big break on the Broadway stage. When Toby needed to step away from the role because of a tumor that needed surgery to remove, and her subsequent issues with recovery; Tulip, another of DesRoche’s rats, took over the role. She wasn’t as excited about it as Toby was unfortunately, and Rose eventually stepped in to begin as her understudy.

Rose loved the work and became not only a sensation with those she worked with, but an ambassador for rescue rats and especially the rest of her West Side Highway family. One night, Rose got her big break and her love of the theater was evident the next day when DesRoche held both girls and opened the little red cage they use on set. In an article from the New York Times, Lydia retells the story: “I said ‘Who wants to go on?’ and Rose jumped in first.” She was an instant star and went on stage again on a night soon after, when one of the actors requested her specifically. 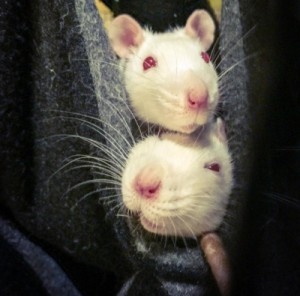 With this new place among the stars, Rose’s job of ambassador also grew. Articles of the West Side Highway rat who was becoming the next Broadway sensation were popping up all over the internet. People that had never heard of the highway rats were learning their story and people who never knew about the intelligence and loving nature of rats were starting to see them in a new light as they read about Rose’s life and personality.

Then, on January 26th, the Times put out a new story (the one quoted previously) but this one brought heart breaking news. Rose, the rising star, had died in a tragic accident at her home. She was climbing and exploring one of her favorite shelves when a door detached from the structure and fell on her. She was hurried to the vet, but passed away on the journey there.

Last week I reached out to Lydia DesRoche and conveyed my deepest sympathies. I understand what it is like to have had a rat pass from a tragic incident and know how hard it is to lose one that is so young. Our entire family was devastated by the announcement of Rose’s passing. 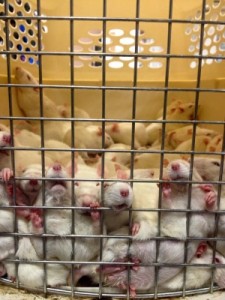 Rescued rats going to adoption event. Posted on West Side Highway Rats Facebook page, used with permission. One of the comments describes the image: “August 23rd when HALT came with 96 rats for adoption day at Mooshoes.” – comment posted by Laura Georgina Budean

I have been working on a post about myself meeting Tulip back stage over the holiday season and decided to save that for later in order to share this memorial of Rose with everyone. I cannot say enough how important it is to have Rose and others bring to light cases of cruelty, neglect, and abandonment involving small animals. Rats like these are fed poison when abandoned and their rescuers struggled desperately to find people to help take them to safety. Had they been kittens or puppies, entire neighborhoods of animal lovers would undoubtedly have flocked to the scene to help in the rescue efforts.

Rose was one of the rats on the median when the city put out the poison. Rather than being captured by city workers who intended only to end the lives of the rats who had been placed in the median, Rose was lucky enough to be captured by people who meant to find her a loving home. She found that home with Lydia and found new life and joy in her role on Broadway. 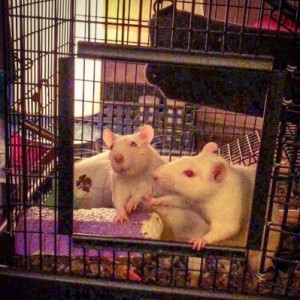 Rose is survived by her sisters, Blanche and Dorothy, and all of the other highway rats in her family who are with new humans that love and care for them. She lives on in the hearts and minds of all of those she touched and all that had the opportunity to work with her both on and off stage. The people at Curious Incident have made a donation to Mainely Rat Rescue in her honor. If you would like to donate to a rescue organization that helped Rose and her family, the site thetravelinrat.org has the following information available:

Rescues and individuals involved in this effort: 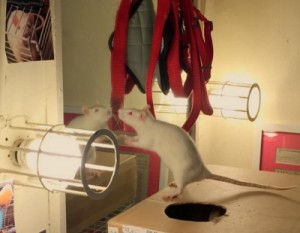 “With Toby temporarily out of commission, Rose generously offered to step in as Tulip’s understudy.” Image taken from Lydia DesRoche’s Instagram page, used with permission

Last night, in my dreams, I stood in the middle of a New York City street and watched as the marquee lights went dark on Broadway – a tradition that marks the passing of a prominent actor or other worker in the theater. When this happens it means that the person who passed did something very meaningful and highlights them as an important history maker in the Broadway community. I found my dream fitting. Though Rose wasn’t the star of the show and wasn’t the first rat to play Toby, she was the perfect ambassador of her kind. We had planned a trip up to see Curious Incident again in spring and I am sad to know that I will never get to see Rose’s famous kiss live on stage, but the next time any rat pops their head out to deliver their kiss scene with perfection and joy, I will be thinking of Rose, the rising star who touched the hearts of so many in such a short amount of time.