Background
Three years ago, I began looking for a companion to share my life with,
specifically, a kitten. When I mentioned this to my mother, she told me about
two cats that had come to the shelter days before in Artesia. My mother had
a friend who managed the shelter, so I was able to get in and see them
pretty quickly. I walked out of the Artesia Animal Shelter with two semi-adult
cats, both of whom were full of personality and quirks. The little longhair,
who was still a bit of a kitten, thought the world was her oyster. Whereas, the
timid tabby thought it was out to get him. Their previous owner had
declawed both of them, and the circumstances of their abandonment were a
mystery. The shelter had no names for the cats, no medical history, and had
only an estimate of how old the two were. They only knew that they had
been surrendered to them from the same person, and wanted them to leave
the shelter as a pair. After having them for a few days, and making it back to Las
Cruces with the pair, I decided on names; Lyra for the longhaired adventurer,
and Ser Skiffington (Skif for short), for my shy, but loving, tabby.
Skif quickly became attached to me, much more than Lyra (she
decided to take my boyfriend as her human). There was scarcely a moment
when I was home that he was not either next to me or in a spot where he
could see me. I learned all his quirks, and what his little chirps and meows
meant as he became my constant companion at home. 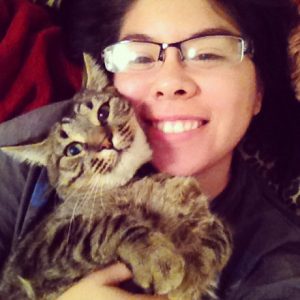 Skif and Leanne, the best of friends.

A year after bringing these cats into my home, Skif began exhibiting
some unusual behaviors. He refused to use the litter box and developed
stress colitis. Then, he began sitting up and posing like a meerkat when he
wasn’t sauntering through the house. Concerned, and knowing about his
previous declaw, I immediately scheduled a visit to his veterinarian. After an
examination and x-rays, it was determined that Skif was suffering from a
common complication among declawed cats. Bone shards had been left in
his paw from the operation, and were not only trying to regrow nail, but
causing whatever did grow to be ingrown and extremely painful. The decision
was made that Skif would now have to undergo a painful surgery to correct
the problem. I will not tell you the rage I felt after being told that someone
else’s selfish decision forced me to put my best friend through a long,
painful surgery, because it truly is indescribable. 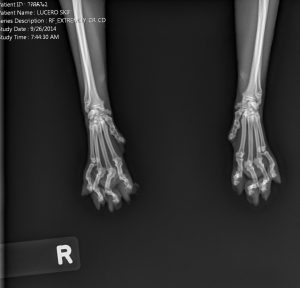 Ser Skiffington’s x-rays show the damage that the declawing process had caused internally.

For the readers that are unfamiliar with this subject, declawing (or
onychectomy) has been recently redefined by the AVMA (American Veterinary Medical Association) as an amputation. Specifically, it is the amputation of the last digit in the paw. Cats are “digitigrade” which is simply a fancy way of saying that cats walk on their
toes. When a cat goes through a declaw procedure, it can take months for
recovery. The cat has to relearn how to balance, how to walk, and how to
shift their weight when jumping. Humans, although we don’t walk on our
toes, often have the same difficulties if even one toe is amputated from a
foot. Our toes, much like a cat’s, are essential to our physiology- the way
we’re built and work. Along with a shift in the way they hold themselves and
get around, there are other complications as well.
Some cats experience pain from bone shards left behind by a careless
doctor, like my Skif. Shards of bone left behind leads to secondary surgery for
the majority of cats, meaning more costs for the owner. After
going through this painful procedure, many cats begin to associate their litter boxes
with the pain in their paws, and begin to seek other, softer places to relieve
themselves. This is one of the top reasons declawed cats are abandoned in
shelters. Still, other cats can grow aggressive due to chronic pain and turn to
biting to defend themselves from an over enthusiastic human (another
reason for abandonment). As they grow older, declawed cats are also more
susceptible to developing arthritis because of their shifted physiology. 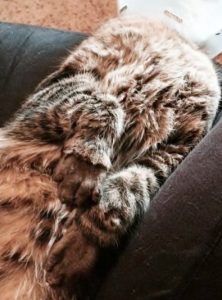 Skif showing symptoms of irritation or pain in his paws.

Pawsome Alternatives
If you or someone you know has a cat and is contemplating going
through with a declawing, I beg you to reconsider. There are many
alternatives to this awful procedure, including a product called Soft Paws that
acts as a cover for a cat’s claws. It falls off naturally with the growth of the
cat’s nails and can be reapplied easily. There are many variations of this product, which can be put on by your veterinarian, or at home. They generally last four to six weeks, and packs available in stores generally contain enough claw caps to last four to
six months. 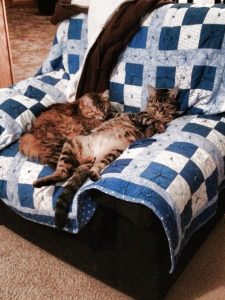 Lyra and Ser Skiffington lounge on the couch together like loving siblings.

Another product available to cat owners is a furniture safe, pet
friendly, double sided tape called Sticky Paws. The method behind this
product is texture aversion. Cats often do not enjoy the stickiness of tape (or
even tin foil) on their paws, and learn to avoid the area. This method works
well when combined with encouraging the cat to scratch on an appropriate
surface, like scratching posts. Some owners may need to explore different
scratching post options, as cats can differ in their preference when
scratching. Some like a nice tall stretch whereas others like to scratch horizontally on
carpets and other materials on the floor. Finding your cat’s
preference is done by simply observing the areas and objects they love to scratch on the most. Catnip is an excellent way to encourage your cat to explore and
try out the new scratching posts. Sometimes multiple approved scratching
areas are needed in a house, in order to explore some different textures and
find one that your cat loves. My cats, although declawed, still retain their
scratching behavior, and often scratch on their cat tree. Some cats are not
interested in catnip, so treats and wet food also work well as a reward when
your cat uses the desired scratching area. With a few weeks of
consistent training and encouragement, you’ll be able to see a shift in behavior from
scratching furniture, to scratching the cat posts. 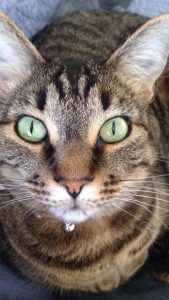 Skif’s deep gaze. Perhaps he’s trying to urge cat owners to not declaw their pets by attempting to stare into their souls? Or, maybe he’s just photogenic.

Scratching is a natural behavior exhibited by cats in order to maintain
the health of their claws. It is also a way to deposit their scent, claiming ownership of
their surroundings and communicating with other pets in the home. It is up to us
as humans and caretakers of our furry companions to keep them safe and
healthy by exploring the safest way to redirect these “undesirable” behaviors,
rather than taking the “easy” way out. Speaking from personal experience,
declawing is not easy and it’s not quick. The simplest way to avoid
consideration for declawing is to start early with your cats. When you bring a
new kitten home (or even an adult cat) introduce them to the area or objects
that you’re fine with them scratching at. Use catnip, treats, and toys to
encourage interaction with the objects.
So here is a final plea from me, from Skif, and from all kitties. For your sake and
theirs, explore options before turning to a major, and unnecessary, surgery
to “fix” something that only comes natural to your kitty.