Since the dawn of professional and collegiate sports there have always been names for teams inspired by animals. Bengals, Bears, Falcons, even Horned Frogs to name a few. So, it only makes sense that a man’s favorite past time should also include man’s best friend right? For many sports like football, basketball, and baseball, they chose to bring the two together. 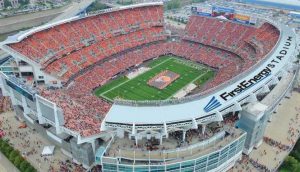 First Energy Stadium, the home of the Cleveland Browns. The Browns are the only team in the NFL named after a dog, specifically, a bull mastiff. Photo taken from cleveland.com

Football is widely considered the most popular sport in the United States and we are the only country to actually have a professional league (besides Canada’s CFL) for it. Originally it started from colleges like Yale and Harvard although the rules were slightly different. After its popularity spread like wildfire, teams began to spring up and one of the first with a dog mascot was the University of Georgia. Their original mascot was named Trilby, a female bull terrier. The origin of the name “bulldogs” for the university is still disputed and it wasn’t until almost fifty years after Trilby’s retirement when a bulldog was crowned the new mascot for Georgia. His name was Mr. Angel. After him, it was officially settled that the team would be known as the Georgia Bulldogs and now Uga VIII, a descedant of a long line of Georgia mascots, is reigning supreme mascot. Uga the eighth had seven predecessors bearing not only the same name, but the same pride and school spirit for the University of Georgia. I’m a fan of Uga and have actually included him in a speech about college sports for one of my university classes.

“In Athens, Georgia, an English bulldog by the name of Uga has been a longstanding representation for his school, the Georgia Bulldogs. He is just like any other bulldog lazy and calm, however, he gets to relax on the sideline of one of the biggest names in college football. He’s treated like royalty and gets a Nike jersey made just for him. The name Uga has been passed down for eight generations and actually stands for the University of Georgia. (UGA)” -Lazarus Gomez 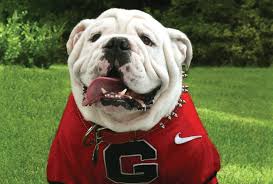 Bulldogs are actually one of the most sought after dogs for sports team mascots. High school and college teams frequently use English bulldogs to represent their school due to their ferocious appearance yet lovable nature. There are over 100 schools bearing the name Bulldog including my alma mater, the Las Cruces High School Bulldawgs.

Dogs go hand and hand with sports so well that there have even been sports created for canines to participate in. A popular yet somewhat frowned upon sport is greyhound racing. Although the practice is legal in many states, many question the well-being of the dogs and the treatment they are subjected to from their owners. There are organizations in various states that oppose these races and look towards caring for these dogs as pets rather than using them for sport. Nonetheless, Greyhounds are incredibly fast and powerful and it’s obvious why people would want to see them race. Thus, they have a sport created specifically for these magnificent dogs. 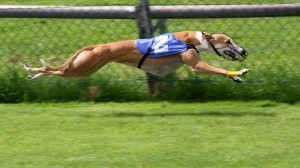 A racing Greyhound in mid-stride.

Greyhounds definitely aren’t the only canines that compete in sporting events. The Westminster Kennel Club and the American Kennel Club are just two of the large organizations that host annual competitions for dogs to compete in. At these kennel club gatherings dogs star in confirmation shows, rallys, agility, tracking and even field events. Trainers work relentlessly to fine tune their dogs to be the best in their respective field/events. Other events that these pets compete in range from Best of Breed all the way up to the Best of Show. The diversity of the dogs that compete is immense. Anything from a Golden Retriever to a St. Bernard can be found at these prestigious shows.  The latest winner of the agility competition at the WKC show was a Border Collie named Tex. However, the Best in Show winner was CJ, a Pointer (German Shorthaired). Awards and even cash prizes are given to winners of events and the popularity of these shows are ever growing. 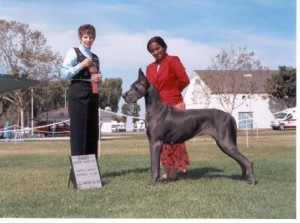 A large dog being judged based on its composition, grooming, and breed at Kennel Club show.

Many star athletes would be nothing without their K-9 companions accompanying them at home. Pro athletes have been known to even bring along their pets to the team locker rooms for games and practices. Super star David Ortiz from the Boston Red Sox is known for loving tiny dogs. He visits the animal rescue shelter in Boston and openly promotes adoptions in the area.  An article was written on dogtipper.com about the star participating in an ad campaign for Pedigree dog food. Ortiz said,  “I couldn’t imagine a day without my dogs Foxxy and Happy. It’s amazing to see how they have not only transformed our family, but also each other.”

David Ortiz isn’t the only athlete that loves animals. PETA had an ad campaign featuring many tattooed professional athletes like Dennis Rodman, Chad “Ocho Cinco” Johnson, and Le’Veon Bell to help get a message out. The campaign used the slogan, “Ink, not mink,” which utilized the athletes’ fame to gain attention on the issue of killing animals for their fur. In each photo professional sports stars are naked accompanied with text saying, “Be comfortable in your own skin and let animals keep theirs.” The list of guests appearing in these beautiful ads includes sports stars from soccer, football, basketball and baseball. However, athletes aren’t the only famed talents in the “ink, not mink ads. There are photos of rapper Waka Flaka, Linkin Park lead singer Chester Bennington, and even Jackass star Steve-O who “let it all hang out” to raise awareness for pets and animals that they love so much. 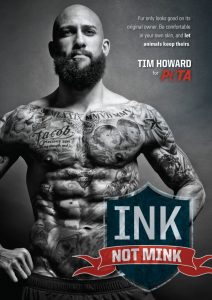 Dog lovers come in all shapes and sizes, some more athletic and famous than others. Us normal folks aren’t the only ones who are a little obsessive with their pets and have photos of them everywhere. It’s common to see sports stars like Mike Conlee (Memphis Grizzlies) post photos on Twitter of his German Shepard puppy or Klay Thompson’s bulldog taking a nap on Instagram(Golden State Warriors). These dogs have their own spot in these thriving sports teams even if it isn’t being on the field participating or barking for their owner’s success. Athletes, like the rest of us, love their dogs and go home after a long day to receive slobbery kisses. 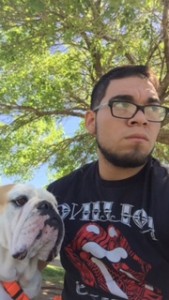 Lazarus Gomez, an aspiring writer/photographer from Phoenix, Arizona has been freelance writing for local newspapers and is currently majoring in journalism at New Mexico State University. He has always been an avid animal lover and has two large bulldogs named Levi and Diesel. He currently resides in Las Cruces, New Mexico and is hoping to pursue his passion in sports writing.