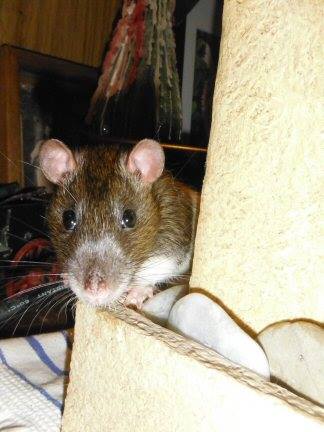 North, figuring out how his fountain works and telling us to turn it on for him.

Regular readers already know of my rat North, who suffered a serious case of pneumonia almost a year ago. Since then, because of the resulting lung deterioration, he has become a rat with special medical needs. He has always been a rat with special emotional needs because he is too smart for his own good. Now I know all rats are smart, they are easily trainable and extremely curious, it’s one of the things that make them appealing as pets, but when we brought North home we knew he was going to be different. From the very beginning, he and his brother Whisper began to train US.

Rat Rules of the house as dictated by North and Whisper:

1) “If I pull on your sleeve, it means lift your arm so I can run on it to someone else’s arm or to something close by.”

2) “If I stand on your hand and lift my nose at someone else, it means I want them to lift their arm.”

3) “If I am riding on your shoulder and tap your cheek with my nose, it means I want you to turn that way.”

4) “If I tap really fast, it means you’re not moving fast enough and you’d better hurry up.”

The list goes on, but you get the idea. Both Whisper and North do these things, but Whisper is always very calm about it, using the commands only when he most needs to get his point across to us.  North, on the other hand, quickly began to use them with a purpose.

1) Go to my first human and tap on her to get her to pick me up.

2) Climb across her shoulders and pull her sleeve to indicate I want to go across to the snuggle chair.

3) Cross to the snuggle chair and settle with my other human.

4) When snuggle is over, climb other human and pull on sleeve to indicate I want to cross to the first human again.

5) Cross the first human and climb down onto sofa for the rest of my play time.

If no one was available to get him to my chair, or if I wasn’t in the chair to start with, North would go on a frantic search for a human who could fix the situation.  One evening, he even jumped on one of our guests, who promptly gave him to my wife. Once in her arms, North tugged on the FRONT of her shirt, pulling her to where I was, down the hall, working in the computer room. By this point we all knew what this meant and North was brought in to me, with much eager cheek tapping. 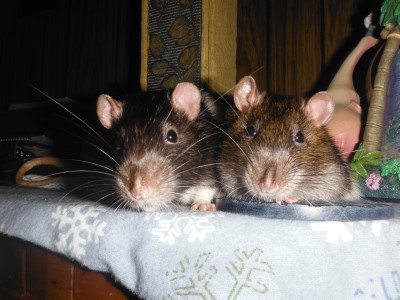 Whisper and North settled down on their table next to the snuggle chair.

After a few months of all of this it became so much of a habit with us that we mindlessly lifted our arms and snuggled into blankets without thinking anything of it. We completely failed to notice that on certain nights, instead of sleeping inside of his nesting box, North would climb on top of the box and face the TV.  By now you can guess that I am about to tell you he had memorized the schedule there as well, but it took us a while to realize there were certain shows he would “watch.” Most of the time North cares little about the television, but he has two favourites that he literally cannot live without: Hell on Wheels and Sleepy Hollow. These two shows he will not miss and when their regular seasons are on air, he is settled in his TV spot just as the show comes on.  And when he is sick? Well, he snuggles down in his blankets and watches reruns of both.  Sometimes this is the only way we can get him to eat food!

North watching Hell on Wheels from his nesting box.

His absolute favourite is Sleepy Hollow, which he still watches on Monday nights, even though the season has finished. When I come home on Monday he is desperate to get my attention, running all kinds of ways, standing up on his back legs, waving his arms in the air. At the mention of Sleepy Hollow he settles down, but heaven forbid I should forget to put on a rerun for him at exactly 9pm!  North has actually become somewhat famous for his Sleepy Hollow watching, as a video of him has gone around one of the rat groups I belong to, and even surprised our vet, who was stunned to see how attentive North was being. 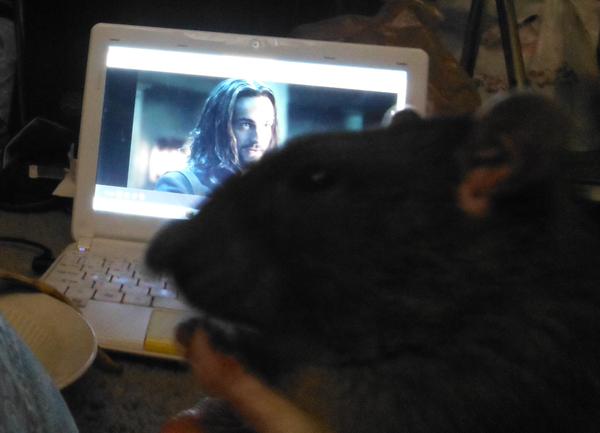 Recently things changed at our house.  In January our ceiling caved in and needed to be repaired. Unfortunately for all of us, North can’t live in the dust and paint of construction, and with the insulation out as well, the house was much too cold for his recurring pneumonia, so the rats and I had to move out. With a rat this particular about routines, relocating was much more complicated than getting the spare cages and hauling things into a temporary home at my mother’s house. Along with all of his regular food and cage supplies, I had to pack baby food and yogurt, medications, and therapeutic items like North’s heating bed. Of course, the move required taking a computer for him to use as a television set. 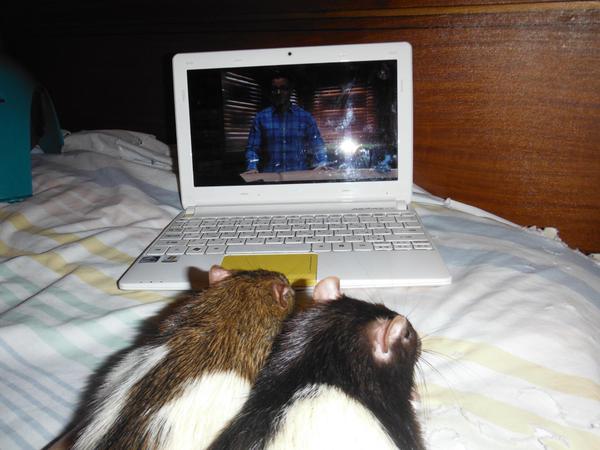 North and Whisper watching an episode of Evolve with John Edward, another of their favourite shows. It’s an episode I’m in, actually, and one in which they are mentioned.

Many would ask why I went through all of the trouble. It seems ridiculous that I should cater to the needs of a rat in this way. Few realize the anxiety North displays when even one part of his routine is out of place. For a little fur creature who tells time and depends on that understanding of his schedule to lower his stress, it was a vital step to take. I knew we were going to be away from home for an undetermined number of days, I knew that my wife wasn’t going to be with us and I knew that the unfamiliar surroundings would prevent North from feeling comfortable. I also knew that as soon as he is uncomfortable it becomes difficult for him to breathe and he begins to lose color in his limbs. These stresses prevent him from regulating his body temperature and reduce his appetite, so I was prepared to keep strictly to his routine, even when we were away.

So this meant watching episodes of Hell on Wheels, Evolve, and Sleepy Hollow.  It meant continuing with his steam treatments in the morning and in the evening.  It also meant learning new rules, such as “When I come out of the steam you will NOT have the fan on. It’s bad for me to have the cold air after humidity!” This is a recent addition to North’s list of regulations, something he taught me just the other night, when he came back from his steam as usual, but wouldn’t eat. Instead he ran frantic circles around the dish and gave me such determined, intense glances that it looked like something out of a horror movie. I kid you not, I sent a message to my wife, filled with concern over his behaviour. It wasn’t until he looked up at the fan above him that I noticed I had forgotten to turn it off.  Once I did he settled down again and waited for his “movies.”

While some things have changed (the time we watch TV together and where we do it) I have tried my best to keep as much of his routine the same as it has always been.  For a while it was touch and go, but I am happy to say that even though we are still not back at home, North is alive and well. I am also happy to say that as I write this, we only have one more week of construction and then we’re back to everything he knows best, his own cage, his own chair, his own reruns. After having been gone for three whole months, I will no doubt have to help him adjust to life at home, but something tells me it isn’t going to take him long to settle in this time.