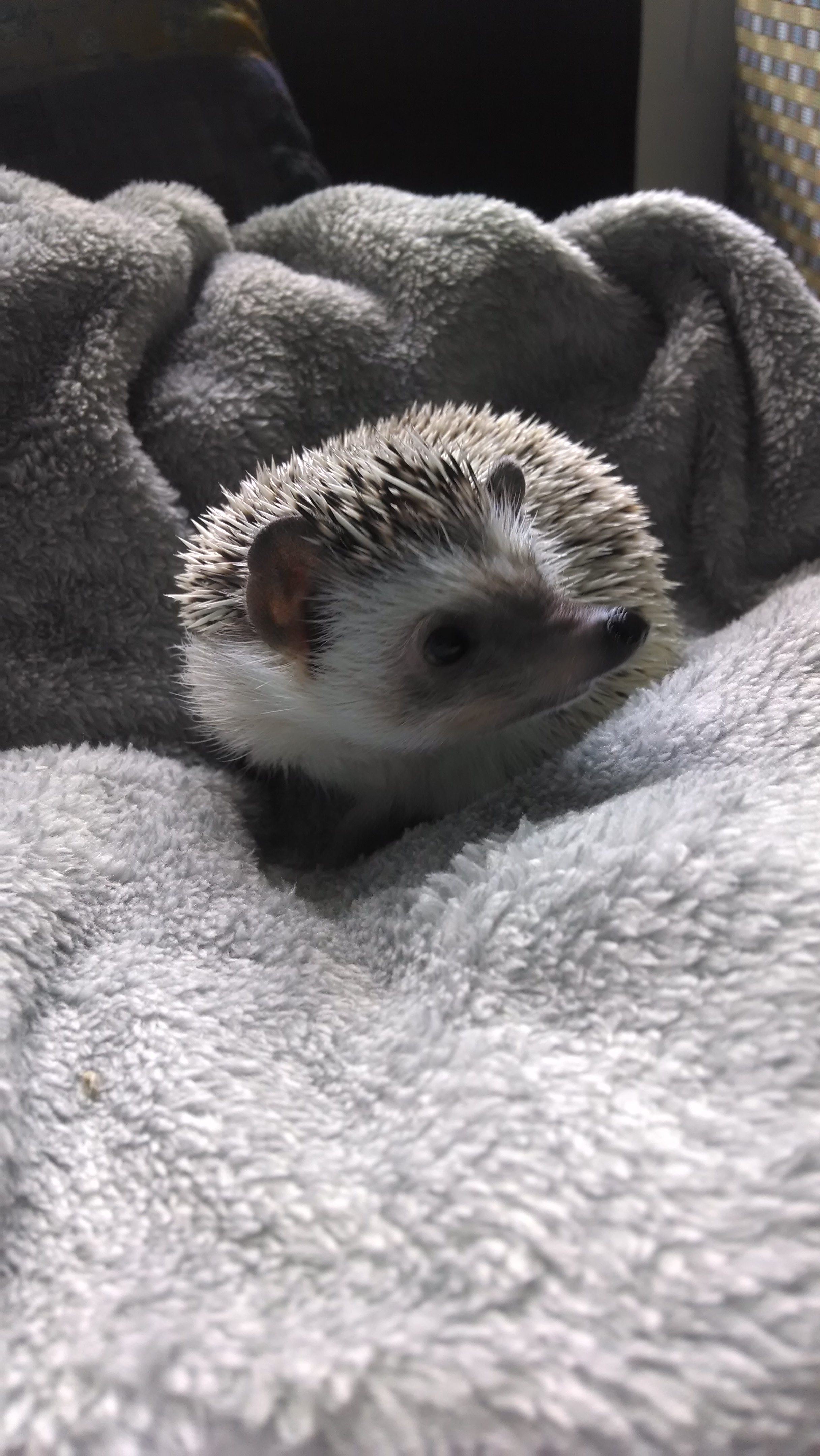 Growing up, you always knew which one of your friends had pets, what kind, and how many. I mean, one of the best parts of going over to a friend’s house was actually getting to play with their pets. I love animals, so I associate the people I meet and know with the animals that they own. In college it’s especially rare for students to have any kind of pet, but you remember those that do. While they’re usually known for having a cat or dog, my roommates and I are known as the girls with the hedgehog.

Hedgehogs are good pets, but they are not your typical household pet; they are an exotic animal that can’t be found at a local vet’s office, animal shelter, or Petsmart. An advanced deposit has to be paid to a breeder, who then gives you a specific day and time to pick it up. My roommate chose and adopted her hedgehog in August to get used to living with him, before moving into our apartment for the new school year. She named him Winston, or more creatively Sir Winston Churchquill.

Even though he’s considered exotic, living with a hedgehog is almost like living with a hamster or guinea pig. Winston lives in a large plastic container with chicken wire attached to the top. The bottom is covered with bedding, and has a wheel, igloo, water bottle, and food dish.  As a nocturnal animal, I don’t notice him much during the day as he normally sleeps in the igloo, huddled under a washcloth for warmth. Sometimes he’ll venture out for food to keep up his cat food diet, but he is more active later at night.

Each day is a new learning experience with Winston. We read that hedgehogs need to be socialized and played with every day early on in order for them to recognize our individual smells. At night we take him out in an attempt for him to get used to us, but usually end up holding him, sitting still and hoping he doesn’t suddenly get scared and stab us with his quills. Winston is normally anxious and hisses, though it sounds like huffing or constant sighing, whenever he hears a loud noise and stays rolled up with his quills out. He usually unrolls when we try giving him different foods, like applesauce or mealworms, and is then more active afterwards. Sometimes he’ll even wander around the living room, but we can always find him either hiding or sleeping under the couch. No matter what, every new thing that Winston does leads to another cute or funny photo opportunity and Twitter post. 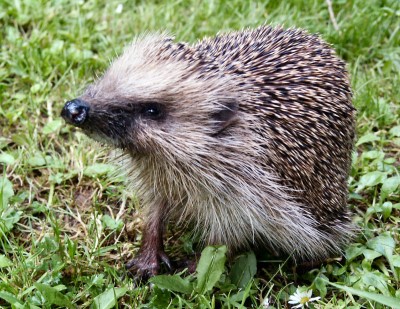 Even Good Pets Can Be Challenging

There are some challenges, though, in living with a hedgehog. As we learned, hedgehogs can apparently be trained to use a litter box. We tried this with Winston, but he still prefers to use the bedding on the bottom of his container or the floor of our apartment when we take him out. My roommate then has to not only change the bedding and clean the container often, but give him a bath too. We just fill a sink halfway with water and use a small brush and baby shampoo to scrub his quills. Even after he’s clean it doesn’t take very long for him to spill his food dish or make a mess again. 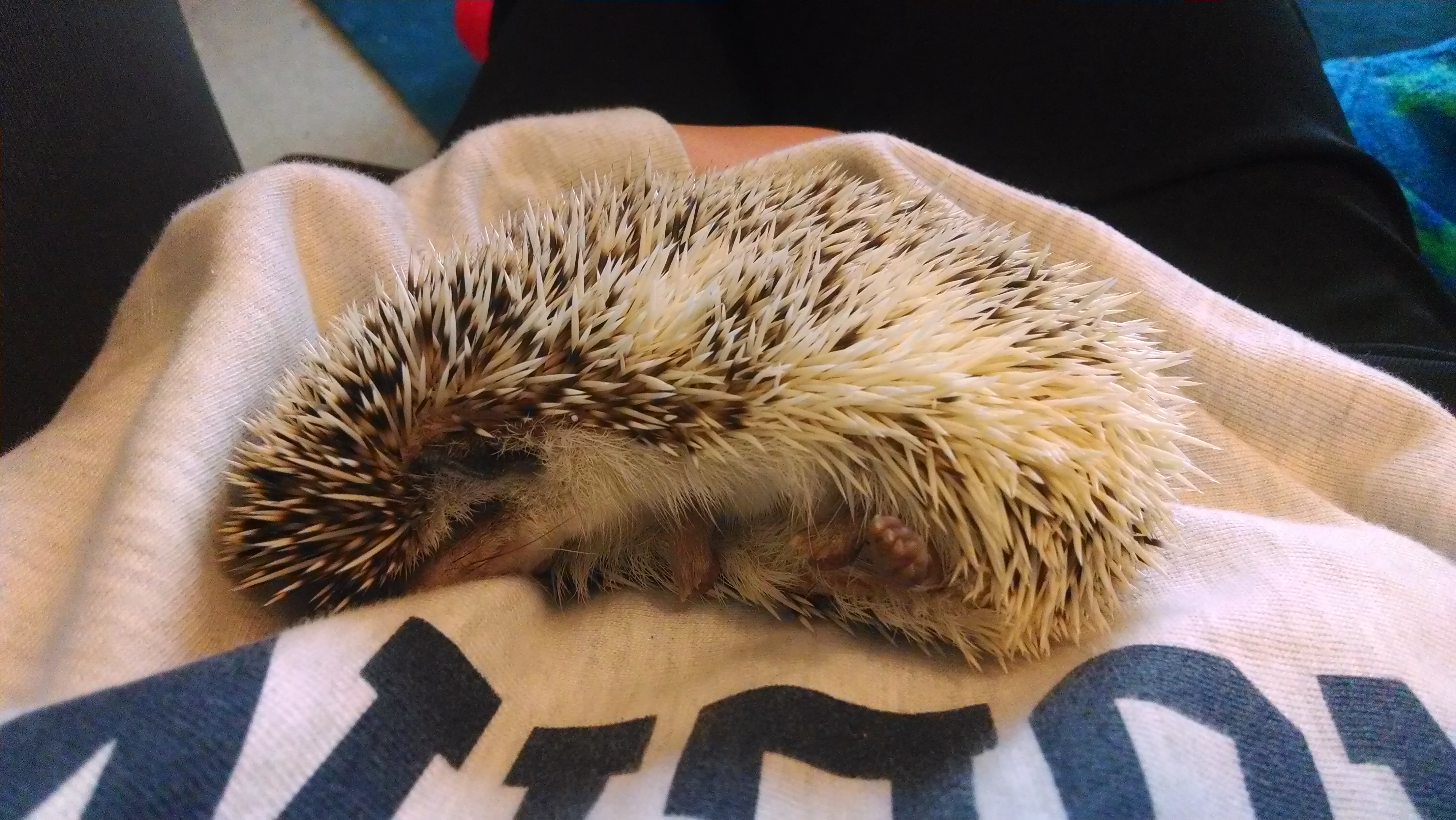 The most difficult thing about living with Winston is in his nightly routine. At first, my roommate had his container in our room, with him living under her bed. As he’s mainly awake at night, we quickly learned how active hedgehogs can be. Minutes after we try to go to sleep he’s up and running on his wheel for what feels like hours on end. I honestly do not know how a small hedgehog can make so much noise running on a wheel. Most nights we’d have to move him either into the bathroom or outside our door until morning.  Eventually we made a spot for him permanently in the living room. Now that we all have a constant routine, the beginning rush of living with the hedgehog has now become normal. 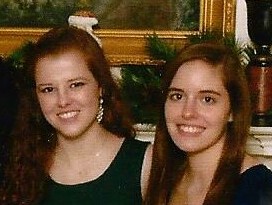 Julia Mainwaring and her roommate.

Julia Mainwaring is a current sophomore Sport and Event Management major at Elon University in North Carolina. When she’s not playing or coaching volleyball, she volunteers at the local animal shelter whenever she can.

Thanks, Julia, for these amazing hedgehog pet facts!