Last year I reviewed a book for this site called The Not So Secret Life of Nimh, a book about a dumbo rat and rat care. Long ago, in a universe somewhat parallel to this one, the author sent me another book to review about a cat who enjoys art and experiences it in a unique way. This was a digital copy, which I saved to my computer and backed up onto a memory stick. Shortly afterward my computer died, as did its replacement. It has taken me until now to get things together, but I can finally review this cute little story of Gatsby the cat for you. 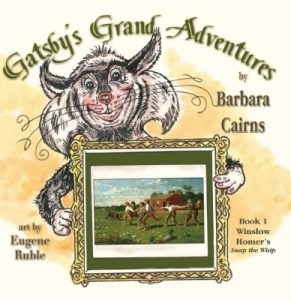 There is magic in these pages, much like the magic of Blues Clues, the television show from Nick Junior, where Blue the dog and a human friend (either Steve or Joe) “skidoo” into a picture on the wall. In that new place they have traveled to, they are able to interact with the image, usually by talking to characters within the picture. Gatsby the cat has a similar power: his tail twitches, his nose itches and his haunches hitch before he leaps into a painting that is part of the art gallery he lives in. Each book is about a different painting. This first installment focuses on Winslow Homer’s “Snap the Whip.”

Gatsby loves art and loves to jump in paintings. The story itself is cute, though there isn’t much purpose in it other than to teach the reader a little about the painting itself. Reading about Gatsby’s adventure, you can discover a few things about this particular work of art: 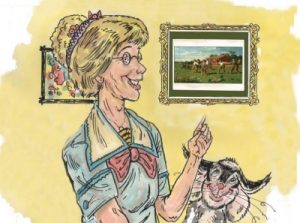 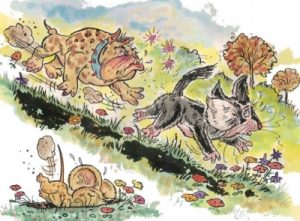 “A huge dog bounded down the hill. The mouse darted into a hole.” Some of the imaginary action in the painting as described above. Illustration by Eugene Ruble, used with the author’s permission.

Now, I know this isn’t a site specifically dedicated to art and literature, so I want to spend a little time on the animals themselves. There isn’t too much to discuss in this department though, the dog chases the cat, and the cat chases the mouse. Both of these things are what you would expect in a short adventure picture book for young children. They provide speed to the storytelling and a purpose for the necessity of the cat’s return to the paintings each night, but there is little else here that is specific to these animals. I wasn’t really expecting anything else in an adventure story book, but I was surprised to discover that there was some animal behavior contained in the pages as I read through.

You do see some very small examples of cat behavior and body language, which I thought was a nice touch, but there were other things that could have been discussed that I felt were pushed aside. At one point one of the boys bothers Gatsby and pulls his tail. This was an excellent educational opportunity to show children the emotions of an animal that feels threatened or hurt by a human’s actions. Though the words read, “Gatsby pulled away. His whiskers flattened against his cheeks. His ears drew back.” nothing else is really said about the incident. The cat is afraid of being squashed, so he jumps away from them and out of the painting. I would love to have a more thought provoking reaction from the cat, who is a thinking entity within the story. If he has the opportunity to think that he will correct his mistakes, then he should have had the opportunity to reflect some on the pain or fear he felt when being bothered by the boys and associate those feelings with his physical reactions. Moments like that would maximize animal behavior and feelings relating to each other. This isn’t an animal behavior book, though, so having a mention at all gets a lot of extra points in my book. 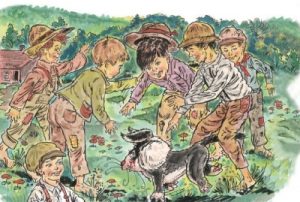 “The biggest boy chased Gatsby and grabbed his tail.” Illustration by Eugene Ruble, used with the author’s permission.

Overall this is a cute story, with a quick running plot and some interesting ideas. It has colorful illustrations that can be busy, but not in a distracting or unpleasant way, and the story teaches some things about art and animal behavior. I think young readers will find his book educational and entertaining, but I think that to get the most out of it, a child should have an adult discuss the story with them as they read and after they have finished. There are many links provided on the back pages for further study of the painting which can help with your discussions and include “Snap the Whip” in some other aspects of your child’s life as both a piece of art and a part of history.

Published in 2012 by Guardian Angel Publishing

This book was a gift from the author in exchange for an honest review.