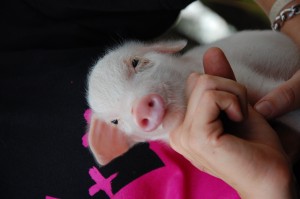 What Is a Teacup Pig?

So, I saw the reference to Teacup Pig online the other day, and thought—what the?  Is it obvious I don’t keep up with Paris Hilton’s choice of pets? Today’s miniature pigs, also known as micro pigs, pocket pigs, and teacup pigs are a trend started in the 1960’s.  At that time, pigs of 150–200 pounds were sent to zoos and were used for medical research on toxicology, pharmacology, aging, etc.  These small pigs were easier to work with than the larger farm pigs.

Today, many animal protection organizations and pig breeders say there is no such thing as a miniature pig, however there are breeders selling piglets called miniature pigs in North America and in the United Kingdom.

Since there is no established breed of “teacup pig”, you have no way of knowing whether the piglet you receive will stay small!  If you do meet with a breeder, ask to see the pig’s parents and grandparents to gauge their size.  Know too, though, that pigs can breed before they have reached their full size, so this is still no guarantee.  Bad breeders have also been known to recommend a diet that starves the animal to keep it from growing.  Also, unless you’re drinking your tea out of a 55 gallon drum, it’s good to remember even the smallest don’t stay teacup sized forever.  The term really just alludes to the fact that they never get as large as the breeds that weigh up to 1000 lbs.

There are many organizations set up to find new homes for pet pigs which have grown too large or unruly.  In 2009, pig sanctuaries took in more than 300,000 surrendered pigs, and they are often put down.

Things To Know If Your Heart is Set On A Teacup Pig:

They’re not legal everywhere.  So you need to do the research about where you live.  Their lifespan is 15-20 years, which is more than most dogs and cats.  They cost around $1,000 from a breeder—a rare rescue animal, this!  And getting them fixed requires a specialist.  Yes, you do have to get them fixed.  Males become aggressive upon sexual maturity, smell bad and can become destructive.  They can be litterbox trained, but will never be as neat an animal as a cat—they’re just not.  They also like to play in water and roll in mud—so if you’re not Paris Hilton and don’t have someone to clean off your pig—get ready with the towels.

On the bright side, pigs are super smart pets, though, and can be trained to do most things a dog can.  They also need regular walks, just like a dog.  And how cute is this?  They lurve their blankies!