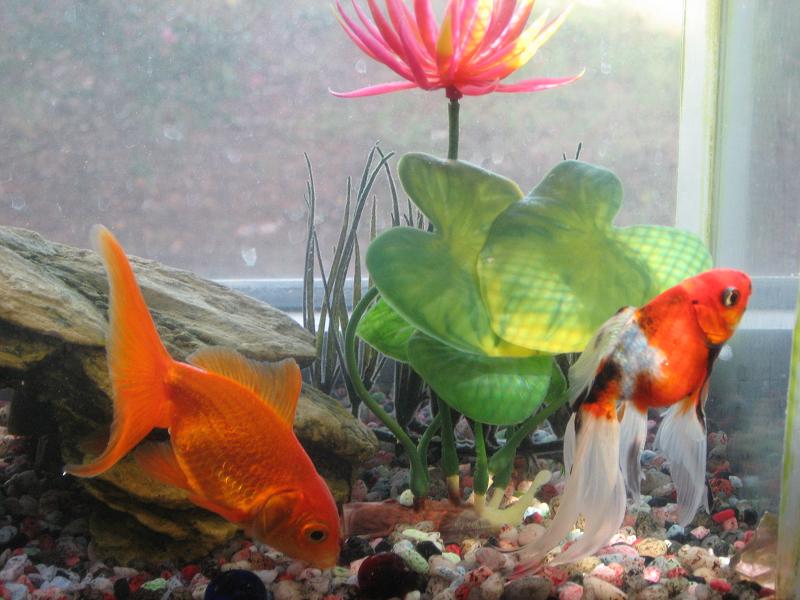 Over the course of my lifetime I have had many fish: LaForge, the one-eyed fantail, Cody and Eric, the Beta pair that fell in love with my computer mouse, a whole tank full of starship/crew named fish who behaved just like their namesakes, and Pluto, my classroom fish who had several tank-friends in his long life and loved to play “tag” with the kids.

I wanted to start Fish Tales with a heartwarming story that would also help to encourage people to re-think what they know about fish. Keep in mind the following is a true story and when you reach the end and think, “No WAY!” take some time to glance over at your own tank and change that thought to, “What if…”

Among my fish with Star Trek names I had a pair named Rene and Data who outlived everyone else. Rene was a larger orange colored fantail (named after Rene Auberjonois of DS9 because of his beard-markings) and Data’s body was about half Rene’s size and a silver-white color. They shared food, swam side by side, and rested together in their inactive periods.

One morning I woke up to feed them and noticed instantly that something wasn’t right. Data was zooming around the bottom of the tank in a panic, and Rene was “standing on his head”, mouth down and constantly open. Since this isn’t your typical fish behavior, I instantly began to worry, but couldn’t see anything wrong… until I got down on my knees, at Data’s level and looked up at Rene. He had picked up a pebble from his tank and it was jammed in his mouth. (This is why it is important to make sure your rocks are bigger than the mouths of your fish.) I assumed that Rene was pointed down, open mouthed, to let gravity take the pressure off and hopefully pull the rock down, but I never would have anticipated what happened next.

While I began to grow frantic over what to do, Data, calmed down, came up to where I was, and turned around to look at his friend. He slowly swam to the other side of the tank and looked up again, swam back to me and looked up some more, then gently approached Rene, put his smaller mouth into Rene’s larger one and sucked that pebble right out! Problem solved! Rene took in a few good gulps of un-obstructed water and the two celebrated by swimming around together, Data fussing over Rene until his movements returned to normal.

The moral of this story? Your fish aren’t going to play chess with you, but they probably ARE smarter than you think. While you don’t have to run out and get the training kits that teach your fish to play basketball or football/soccer, you might want to give a little bit of thought to the intellectual stimulation that your tank’s environment provides. These little swimmers aren’t just a nice decoration for your room, they have thoughts and feelings of their own, even if they aren’t at our mental level. Keep in mind that fish are not solitary creatures and they don’t naturally box themselves in to a tiny space with nothing to do. My fish have always had “toys” (little crystalline plastics) that are lightweight enough that they can easily shuffle them around in the water. My current batch of three (Charon, Nix and Hydra) prefer to sort them out from their other objects and push them into a corner, while Pluto preferred to hoard them in his cave, and LaForge took great pains to scatter them evenly throughout his entire tank, each crystal going in exactly the same place it had been in before I cleaned his tank… Which is a story in itself that I promise to share another time.

You can e-mail her with questions at: mirrani@earthlink.net.