Hagen Inc. is a German family owned pet supply company founded in 1955.  They started in Canada with the exportation of bird seed, and are now part of the international market including the US, UK, France, Germany and Malaysia.  They sell to both Petsmart and Pet Food Direct, as well as other stores and feature the Nutrience line of premium dog food, as well as the Habitrail  line of tubular hamster housing. 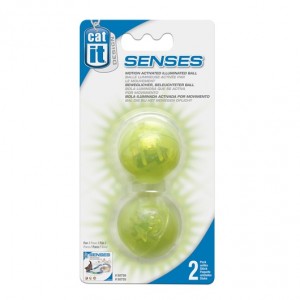 So the other day I went shopping at Pet Food Direct for dog food and thought I would pick up something for the cats as well.  I saw these cute play balls where the flashing light (similar to what you see with laser pointers) was motion activated–neat!  I thought Little Dingle would love them!

(For those just tuning in, our two spoiled cats live on the lower level of our house, the space that’s complete with the big TV, wall to wall carpeting and the reclining furniture.  We call it Cat Town, as opposed to Dogville, upstairs).  The cats don’t get as much playtime recently as I’d like, so I thought this might stimulate them a bit.

But as it turns out, not so much.  Both Dings and Cash would obligingly pat the nice little ball and it would flash at them.  Then they’d give a catty little shrug and walk away.

So–final assessment:  this toy works–the thing rolls and the lights flash without fail.  But you might want it for a younger kitty.  Dingle and Cash are 8 and 10 years old, respectively.  Although Dingle will still play with any string–moving or not–it’s pretty hard to get Cash interested in toys.

In the meantime, to buy your own, go here. 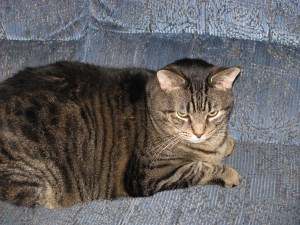 I am Dingle and I approve this message.