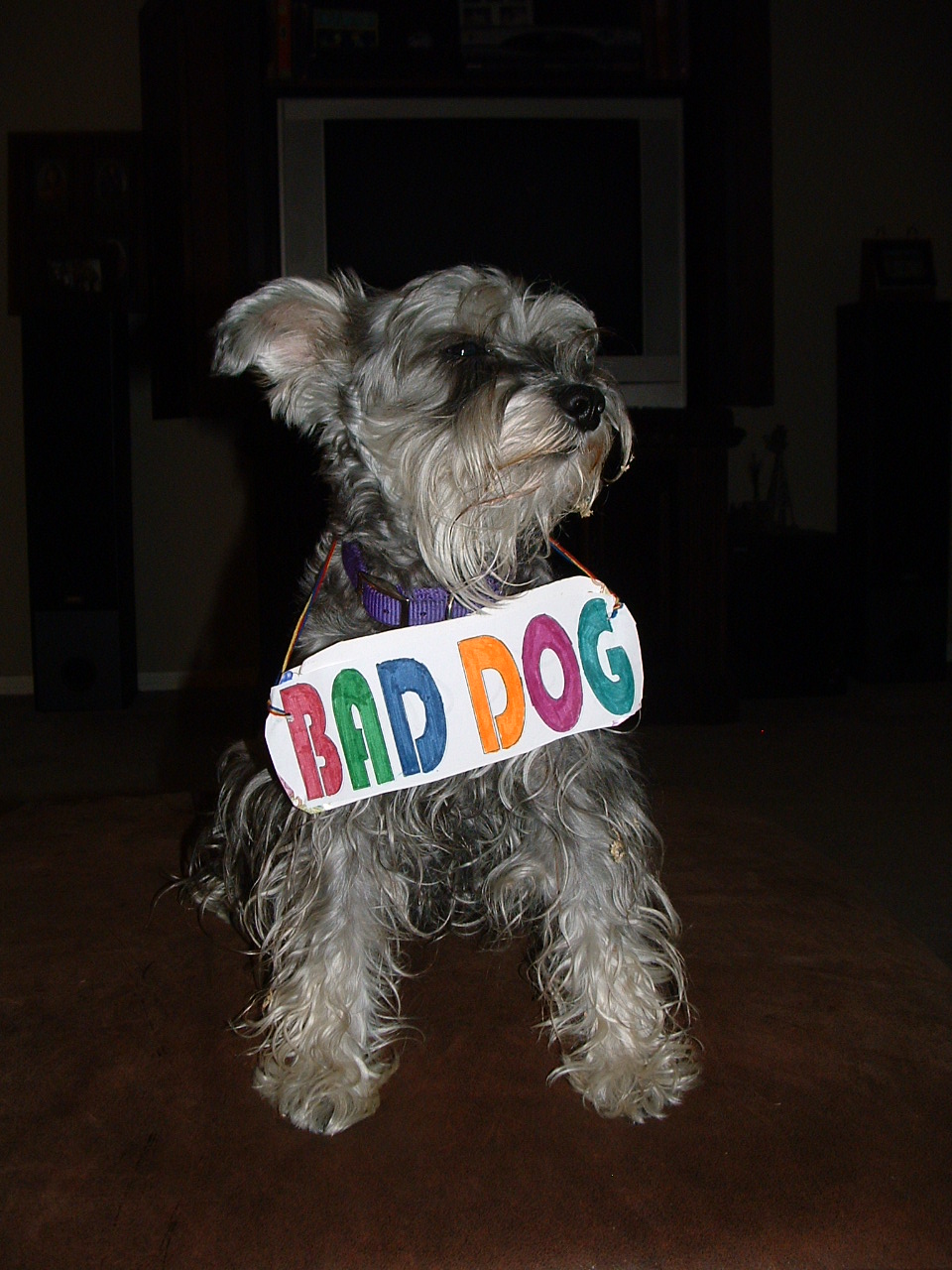 If you’re new to the world of canines, this first section is for you!  If you are an experienced dog owner, you can skip to the next heading.

If You’re New: How To Not Assess A Dog For Bad Behavior

The other day I read a story on the web and was really shocked.  A Doberman rescue worker had been called out to assess a dog for bad behavior and determine what needed to be done to re-home it.  From what the worker had been told, the dog was so out of control that drugs might be needed to calm the animal down.

When she arrived, she was told the dog was making it impossible for the owner to work at home, things were so bad.  But when she asked to see the bad behavior, she was in for a surprise.

The dog’s “bad behavior” consisted of putting her head on the owner’s knee when she was sitting at the desk, and sniffing inquisitively when she opened a cabinet!  The rescue worker was overjoyed that in fact this was NOT a dog with bad behavior, and would be relatively easy to re-home.

But I was appalled: how could this owner not know that in fact the dog was crazy about her and not a problem at all?  Then I thought about the fact that everyone out there isn’t like me (I have ODD, Obsessive Dog Disorder!).  You might really not know, if you’ve never had anything to do with dogs before.  And you might not know if you’re watching someone else’s dog and you have no experience of the animals.  Thus this blog post was born! 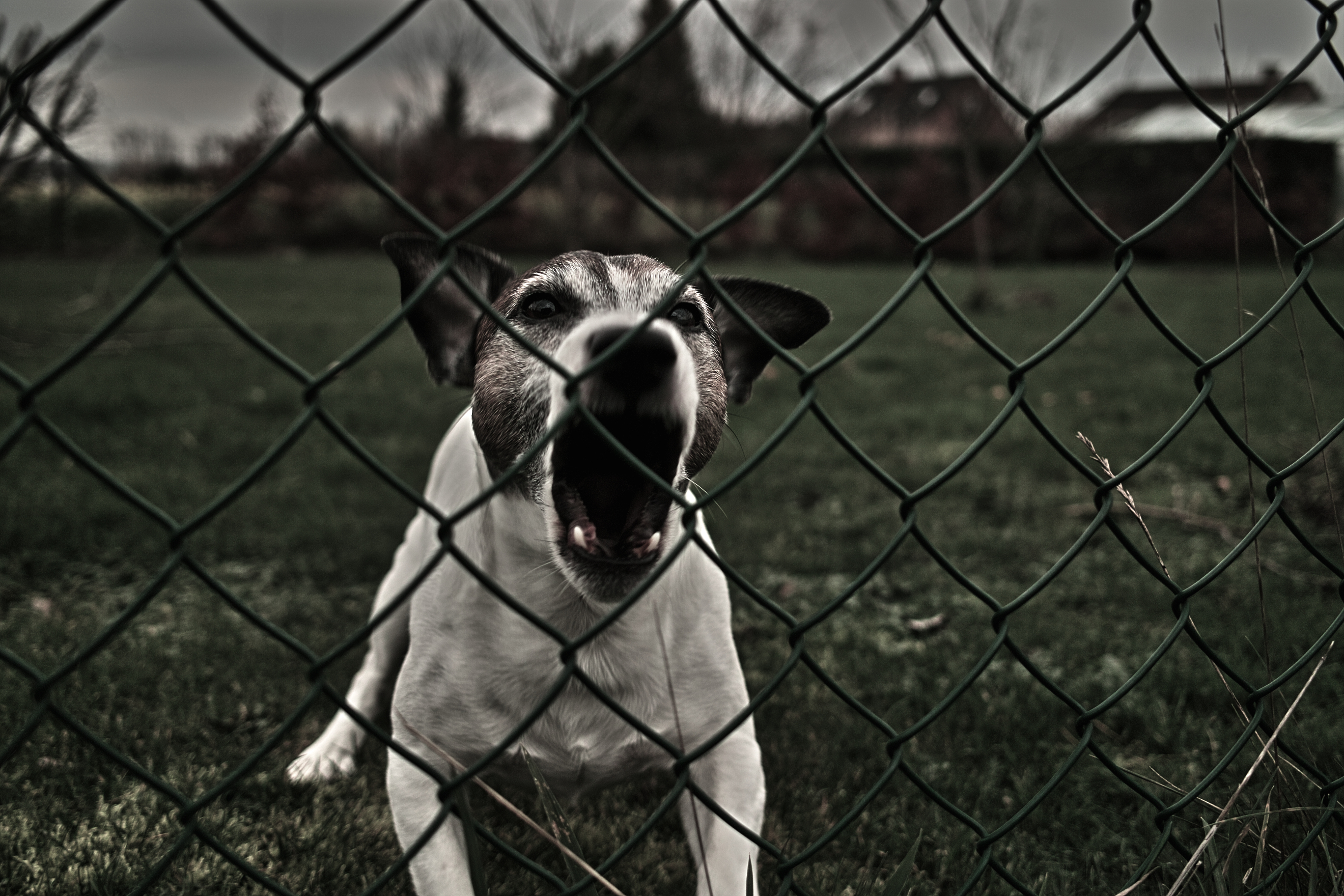 So let’s start with the basics and keep it simple.  What IS the right way to assess a dog for bad behavior?  If your dog shows any of these signs, it’s bad:

But the real question is: how bad?  And what’s the best way to handle it?

Of course, you can think you know everything there is to know about dogs and how they think and feel, just because you grew up with them–and then end up adopting a breed new to you or an abused rescue or puppy mill dog…even a senior dog when you’ve never had one before!  And then it’s back to square one.

So, dog behavior for the intermediate dog owner first consists of: Know Your Breed. 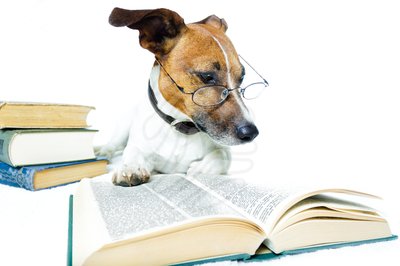 It’s not enough to just read about the breed you’ve chosen.  Talk to some other people who love the breed–and preferably own more than one!  They’ll tell you some things you’d never read in a book–both good and bad.  Know what to expect going in, and you won’t make any stupid mistakes later.

I know whereof I speak–after all, how do you think I contracted ODD?  🙂  Seriously–you get it when you find yourself cruising the internet late at night until your eyeballs bleed in an attempt to learn everything you can about your furry best friend that, as cute as she is, cannot tell you why she’s acting out.  (And you’re tired of guessing.) 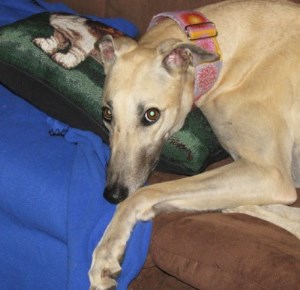 Here are some things, for instance, that I didn’t read about my greyhound in a book:

This breed likes to snap their teeth together when they’re excited–in your face!  It’s not an aggressive gesture with them.  They are just overjoyed about something.  (With Seba, she’s usually greeting me at the door, or getting ready for a walk or to eat.)  By now, I’ve gotten so used to seeing this that I just pull my face back out of the way and go about my day.  But it would be pretty scary if you didn’t know she was going to do it.  We have no small children at my house–but if one were to come visit I would make sure it was not in the same room with an excited Seba–little fingers can’t get out of the way in time.  And even though *I* know my hound would never hurt anyone, a baby’s parent wouldn’t appreciate the snapping.  (Incidentally, does this mean greyhounds can’t live in houses with small children?  No way!  But you do have to teach the kids what’s special about this breed and to protect their fingers and faces from excited snaps.)

Also, greyhounds take particular exception to being awakened suddenly.  They can sleep with their eyes open!  So we learned to be cautious if there was any possibility we were waking her, or risk a snarling leap off the couch.  Again, no way would my dog hurt me–this is just the way they all are. 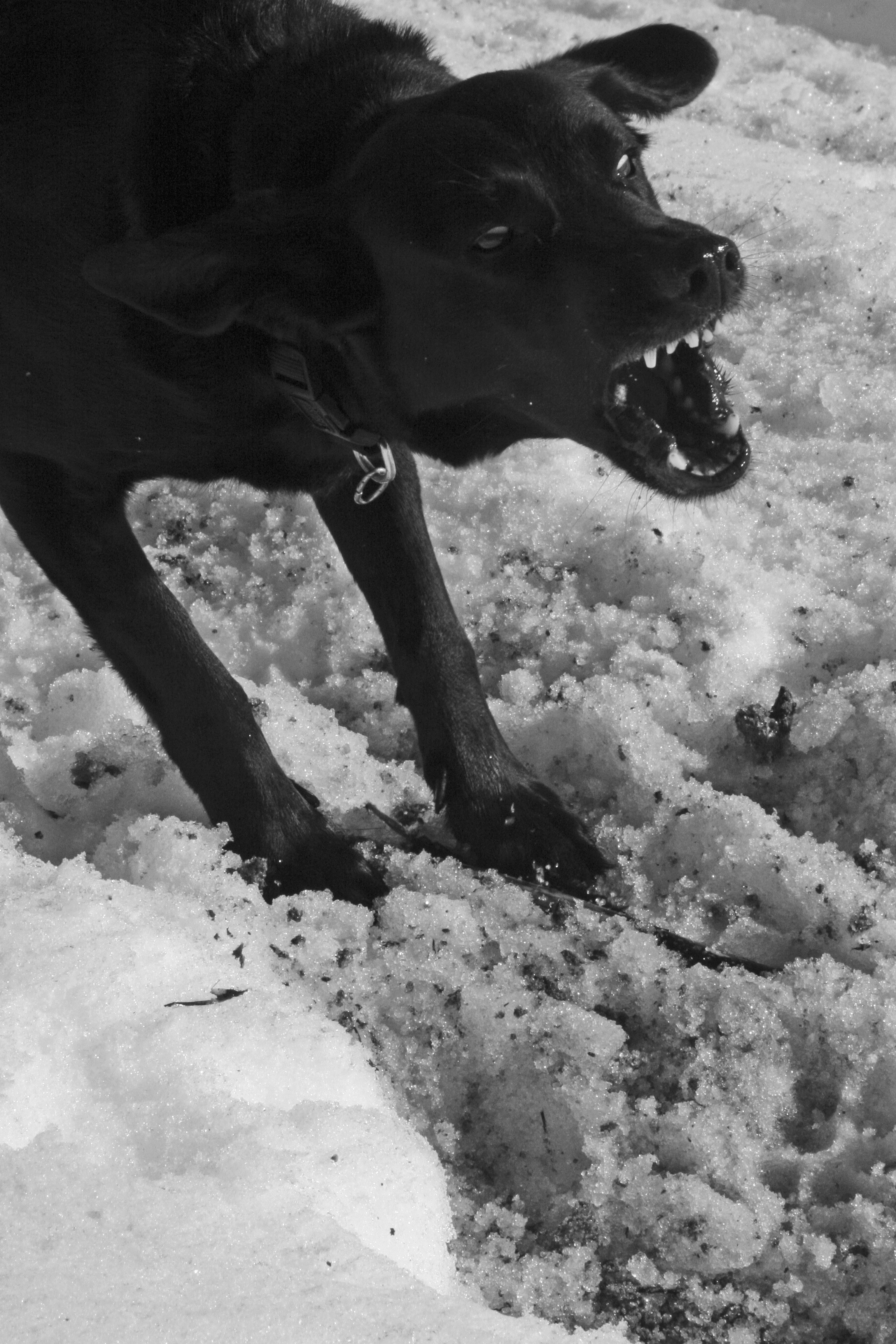 Aggression can stem from fear, frustration or poor socialization.  I’ve seen dog owners who are ignorant or simply in denial think it’s okay for their dog to bite them, or another dog!  This is never okay.  Some situations with anxiety or pain can cause dogs to bite from fear.  You’ll know if this has escalated into aggression if the dog barks furiously, then nips people entering the house or coming into your proximity.  Dogs that intend to bite will usually growl first.  If you have a dog that is a “silent biter”, this is highly dangerous.  If you are not sure if your dog is exhibiting true aggression, see a professional.  The good news here is that most dog aggression problems can be solved.  Only in the most extreme cases are they truly insurmountable. 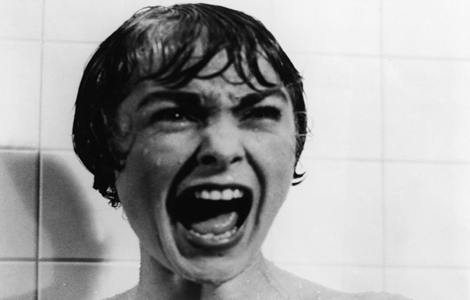 One of the next things I wasn’t prepared for was Seba’s first “Greyhound Scream Of Death”.  One afternoon, she was lying quietly on her bed taking a nap–and the next moment was uttering a high, loud squeal of pain and limping around the room!  I thought at first she had injured herself playing in the yard–but then realized she had been indoors for some time and sleeping awhile.  What the–?  I Googled, and found that leg cramps are pretty common in greyhounds if they’re not drinking enough water or have a vitamin deficiency.  Just like I sometimes awakened in the middle of the night with a charlie horse, she had, too!  I did some more research, and began adding a little calcium-magnesium supplement to her food.  Problem solved–at least, mostly.  She still has cramps sometimes–but it’s rare.

So–bottom line: know your breed.  And, if you have a mixed breed, do everything you can to know all the breeds involved.  You’ll be happy you did later. 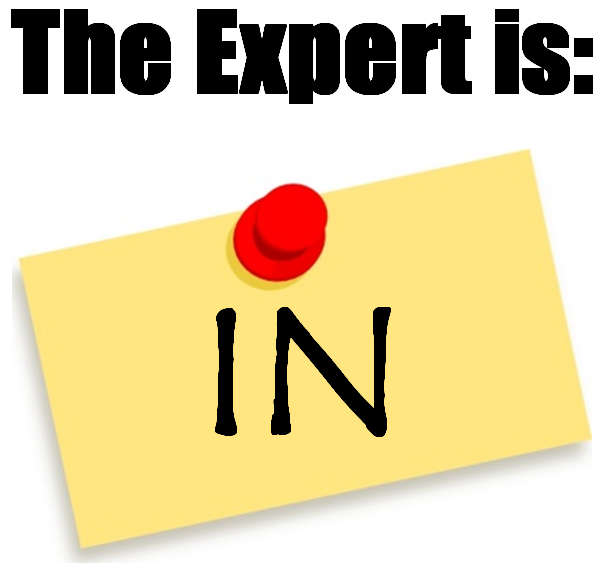 Dog Behavior For The Seasoned Owner

Okay, so you’ve had dogs for awhile–and you know your breeds.  You’re out of the woods, right?  Not so fast!  Do you know your dog’s personality?  And do you know that, just like a human, it changes with age?

Dog behavior for the seasoned owner is mostly about not thinking you already know it all!

As for anxiety, Seba had some of that, too.  Namely, she is afraid of the dark!  This took some trial and error to nail down that it was not an issue with her eyesight, but instead simple fear.  And some of this goes back to breed.  When another dog is fearful, it might bark or whine–but greyhounds RUN.  (Or freeze, like a deer.)  None of my greyhound owning friends had experienced this problem.  I was on my own to figure it out.  And Seba herself was actually pretty helpful.  Unless she “forgot” (like a young child might) when she was running outside with the other dogs, she stayed inside when it even looked like it was near sunset.  And to this day, if we are out walking and it’s getting late, she will insist on turning back toward the house.  I may never know what caused her to be this way–but I respect it.  I know her. 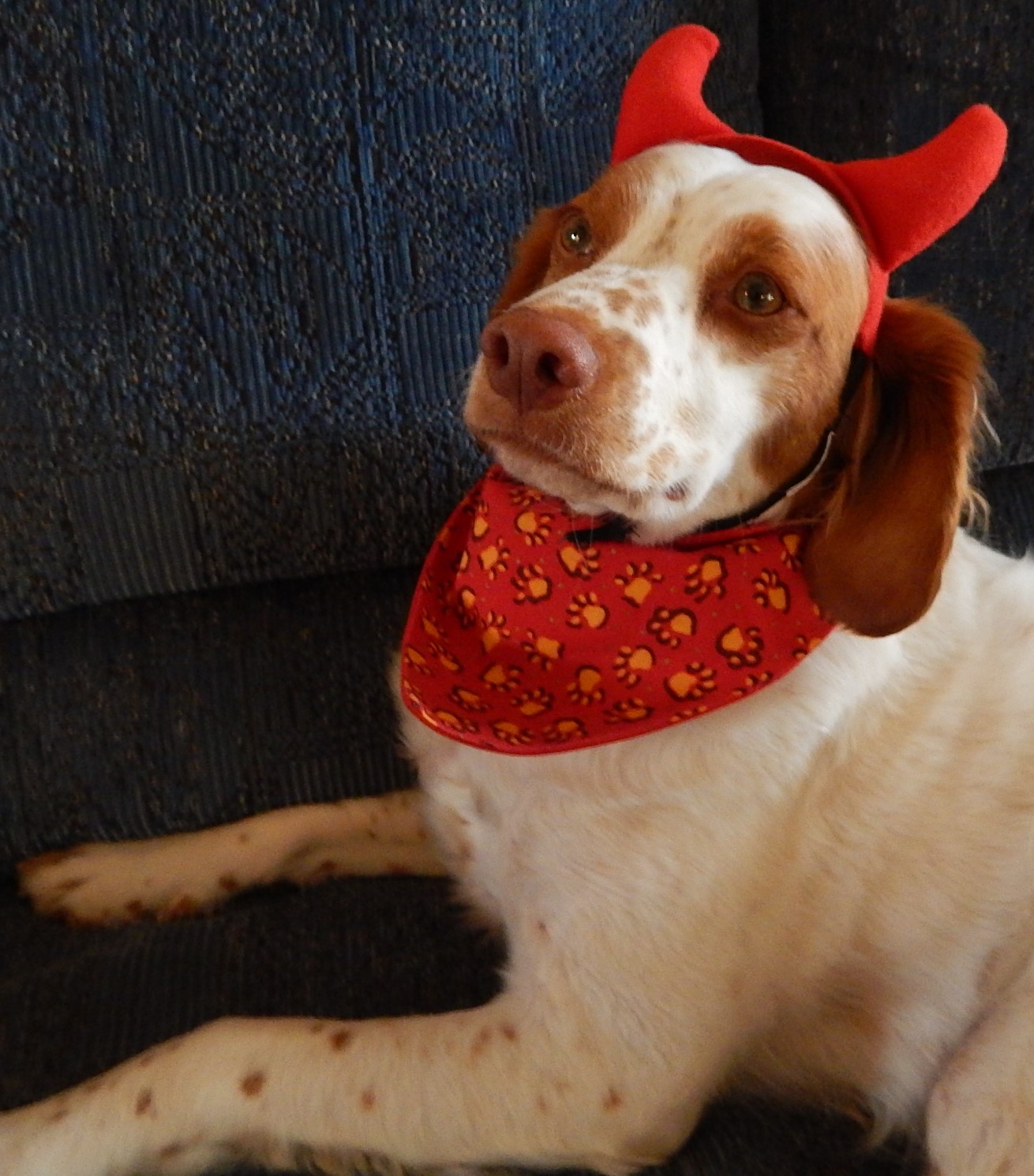 Castle, our own personal El Diablo.

Just like I know that my Brittany, Castle, likes to chew things.  She never outgrew this after puppyhood.  It’s just…her.  Lucky for me, I know the things she prefers: like paper napkins and the occasional pair of earbuds.  So I keep those things put away and we’re good.  I also know that my Basset boy does not know the difference between inside and outside.  It’s all the same to him!  So, as soon as he is finished eating or drinking water, he is invited to step outside to do his business–lest he simply walk to the nearest vertical surface.  Because, like Honey Badger, he just don’t care!

So–do I have dogs with “bad behavior”?  Just like kids–sometimes. After some experience, what it really comes down to is knowing your dog, and knowing yourself.  If you can, start by choosing a breed that fits your lifestyle.  A great source is the Dog Breed Selector at Animal Planet.  Then talk to other people that own a few of the breed you’re thinking of.  After that, get to know your pooch.

Because no dog should have to be given up simply because it’s loving and curious.