Many people go about their days and some notice the number of wild cats living in their neighborhoods, on college campuses, in gardens, or even in the alleys of cities. Out of sympathy, some people bring these stray cats into their homes as a new pet without considering how this change of environment will affect the cat or themselves. This is not to discourage folks from taking in homeless cats or kittens; those who do are animal saviors. But let’s go over a few questions that you should ask yourself:

If I take in a feral cat, can they become a happy, welcoming, domestic pet? 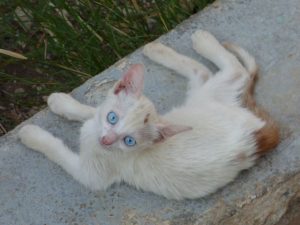 Should I take my new cat straight home? How do I start training them? 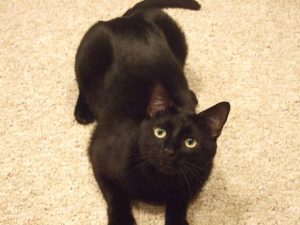 This cat is very curious about what is going on, but he’s not ready to get involved yet.

How can I tell is trust is building?

Fredrick Douglass and His Story 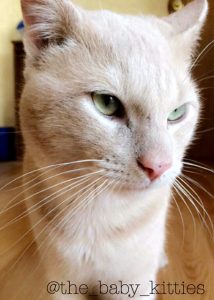 About a year and a half ago, I came home from my boyfriend’s (now husband) fraternity house. I was exhausted and on my way to the restroom to brush my teeth. When I walked in, I heard very loud meowing coming from the room. I couldn’t figure out where the meowing was coming from! It wasn’t until I crouched near the bathtub and I realized there was a cat stuck underneath it! I immediately called my boyfriend and said, “Honey, there’s a kitty inside the bathtub!” Kyle drove over as soon as he could, went to the back of the house, pulled the panels apart and a little blonde cat crawled from under the house and into Kyle’s arms.

After we pulled the burrs and thorns from his coat and paws, we brought him inside and continued cleaning him up. This little cat has become an addition to my household as he and Kyle had imprinted on each other. Kyle had been reading former slave and abolitionist Fredrick Douglass’s autobiography My Bondage and My Freedom before he rescued this cat from the bathtub. Out of inspiration from such a strong man and great author, Kyle named his new cat Fredrick Douglass; Fred or Mr. Douglass for short.

We took him to our veterinarian a few days later and learned that Fred was about eight months old, didn’t have a microchip, and wasn’t neutered. After getting him his needed vaccines and scheduling his neutering appointment, Kyle and I brought him back to my home and began introducing him to my other cats; Missues and Baby Kitty. Fred didn’t have the easiest time adjusting to the other cats at first. He and Baby Kitty fought frequently for dominance and territory. Missues would avoid Fred as much as she could, but would be cornered by him sometimes when he wanted to try to mate. 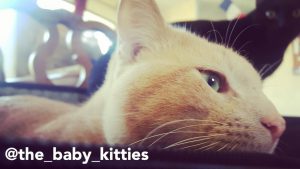 Fred was hesitant to letting me touch him and only accepted pets and snuggles from Kyle. He began spraying in the other cats hiding places to assert his dominance, and even on Kyle’s shoes and dirty clothing. And when it came to feeding, Fred would become aggressive with whoever was eating; growling became the norm when we placed food in front of him, and we had to be fed separately from Baby Kitty and Missues. To say the least, it was a struggle in the beginning.

Kyle was a previous dog owner and, with Fred as his first cat, he was confused with Fred’s behavior. When he picked up Fred, loud grumbles and growls always came, and when we walked past him sometimes Fred would crouch and hiss at us. So, we practiced leaving Fred alone and letting him discover the house, us, and the other cats at his own stride. Of course, when Fred would attack Mr. Baby Kitty or Missues we would put him in a kennel, but other than that we let him do his own thing. Eventually, Fred started sleeping with us. He wouldn’t come close to our faces, but we would curl in a ball at our feet or between our legs. He also started letting me touch him, brush him, and bathe him when was he was dirty. 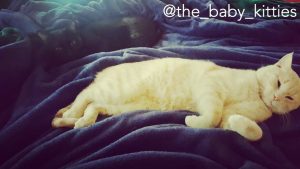 Baby Kitty and Fred comfortably lounging on their parent’s bed.

After Fred was neutered, he became less hostile and more curious about the other cats and what Kyle and I were doing. He began sitting on the arm of the couches while Kyle read and he laid on my yoga mat, staring into my eyes while I was in downward-facing dog. Fred was staring becoming kinder with Missues, and he  would lay next to her while she slept. He became more affectionate with Baby Kitty, too! Fred isn’t much of a lap cat like his brother is, and he isn’t as introverted as Missues, but he’s adapted well to living in a house with other cats and he loves being able to spend one-on-one time with his Dad and myself when he wants to. 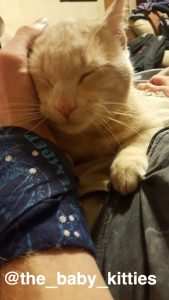 A very happy Fred cuddling with his loving Dad.

If you find a feral cat and they aren’t comfortable with your home or your lifestyle, you can always foster them until you find an appropriate home for them. No-kill shelters and sanctuaries are also a great way to save a life without sacrificing your time, home, or the happiness of the cat you thoughtfully rescued. They may not be the right fit for your home, but you can still help find them their purr-fect forever family. 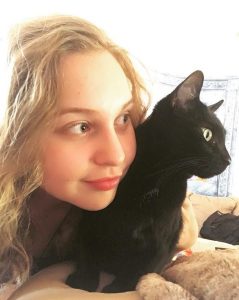