Budgerigars, more commonly known as parakeets or budgies, are very popular and they  are also a highly recommended beginner pet bird. Due to their small size, easy care, and vibrant personalities, these birds have become well-known in many pet stores. Because they are actually very small parrots, budgies have a noticeable intelligence, and they tend to be quite easy and interesting to train. 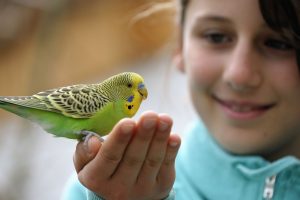 Many different parrot species were discovered during the era of exploration. In 1770, Captain John Cook ventured into the “Land Down Under”, Australia. He discovered that there was a wide range of strange and unique creatures inhabiting this country. One of these creatures was the species “budgerigars”. The captain saw flocks of very small birds with pointed wings and tails displaying vibrant colors of greens and yellows under magnificent stripes. After discovering so many new species, John Cook became one of the first explorers to bring back budgerigars to Europe where they were further researched. Since his initial discovery of the budgerigars, we have leaned so much about these wild flocks.

Only existing as native wild parrots in Australia, budgies display colorful patterns of stripes over green and yellow feathers that assist these fleeting birds in staying camouflaged among the trees and grasslands that they frequent. Budgies are nomadic birds, which means they do not stay in one area for long. Traveling constantly, budgies are always foraging for food sources such as ripe seeds or grasses. Flocks of budgies will migrate across the Australian country to remain in warm weather. Built well for dry deserts, budgies are able to sustain themselves as long as the temperatures do not reach heights above 100 degrees Fahrenheit. They also do not care for temperatures lower than 45 degrees Fahrenheit. 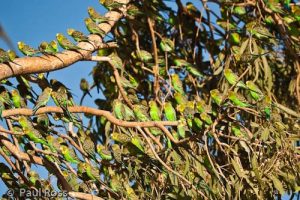 Wild flock of Budgerigars in Australia.

In 1838, John Gould and his brother visited Australia and brought back a few budgies to England with the belief that they could be sustained in captivity to be bred and raised. A success in Europe, budgies became the newest, most colorful pets. However, in 1894, Australia created regulation against exporting these unique creatures. Budgies were then only bred across Europe, rather than being imported and exported from Australia. At that time, only budgies that had been bred in captivity in Europe for several generations would be available for adoption. These colorful bird pets were becoming quite popular throughout Europe, and mutations began to arise. A new color variant emerged in Belgium in 1875 of an all yellow plumage mutation. Spurring more curiosity, selective breeding resulted in the blue plumage many of us recognize today.

Budgies were introduced to the United States in the 1920’s where they received the same enthusiasm to be added as a member of the households as they were in Europe. Today, with their popularity being so high, budgies are capable of being bred for different color pallets. The top 3 varieties most easily found from breeders and pet stores are still the original green and yellow, the blue, and color combinations called “fancy”. 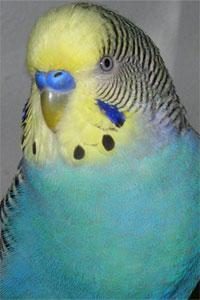 An example of a fancy budgie. This one has a yellow face and a turquoise breast.

The wild instinct of the budgerigars can still be expressed in these pet bird companions’ behavior, but by accepting its nature and adjusting their care, people will have a happy and healthy budgie for a family member.

How to pick your budgie

Before coming home with the first budgie you see, you may want to observe a few factors so that you have a better idea about the particular bird(s) that will be joining you at home. Some factors you will want to consider while selecting a pet are the individual’s behavior, health, age, and sex.

Just because you have identified the most vibrant, beautifully feathered bird does not mean that it has a compatible behavior for you or your household. One budgie may be very tenacious, playful, and dominating, while another may be more skittish, secluded and shy. The best way to discover their personality is to observe the birds you are thinking about purchasing several times throughout the day. Like most desert originating species, budgies are most active at dawn and dusk. Take this into consideration when observing them because, if you go to visit the birds at noon, they will be in the middle of their siesta time versus being more playful and animated in the evening. If you are in contact with a budgie breeder, it may be easier to discover these personalities. The breeder has been raising this particular set of birds since birth, and they should be able to tell you which birds get along best together if you are planning on adopting two or more. 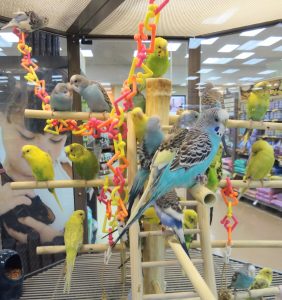 Budgies on display at a pet store.

Health is another factor that is very important to consider before adopting. The health of the bird is critical so that you won’t get any other household birds ill nor have to start out with a sick bird. When observing behavior, look for signs of sickness during active hours. These signs include the bird remaining secluded and away from others, the bird’s feathers stay fluffed up (sign of being cold), discharge around the eyes, nose, and vent (a birds bottom), or excess drowsiness. Speaking to the breeder or salesperson will help you to identify healthy and happy birds. A healthy bird will have bright eyes, no discharge anywhere, a clean vent, and they will demonstrate signs of activity.

An example of a healthy Budgie versus a sickly budgie with discharge around cere (nose) and remaining fluffed up.

The age of the bird is good to consider as well. Discuss the maturity of the bird you wish to bring home before completing your purchase. The majority of pet stores only sell young birds that are about one month old. Younger birds have yet to fully develop their own personalities and do not yet have their genders identified. Young birds will have completely black iris and they will be smaller than 7 inches (a mature budgie height). The lifespan of a normal, healthy budgie averages between 5 to 8 years, but with good care some are able to live past 10 years.

A side by side comparison of the colored cere identifying the differences between male and female budgie.

A budgie’s gender can be determined in a mature bird due to a sexual dimorphism trait. The color of the male’s cere (the protruding nostrils located above the beak) will display a vibrant blue or even a purplish color, while a mature female’s cere will remain a light pink. There can sometimes be mutations were the sex cannot be determined by the cere, but when in doubt, speak to your avian vet. It is important to know the gender before housing birds together, because this may result in accidental chicks.

There is more to learn about your budgie buddies! Stay tuned for Part II coming out soon! 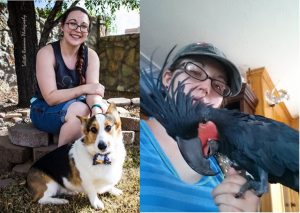 Ashley Gurnea, our Avian Editor, is a certified bird feeding specialist at Wild Birds Unlimited. A graduate from New Mexico State University, Ashley earned her bachelor degree in the field of Animal Science. She completed an internship at an exotic animal park, working with animals ranging from camels to porcupines and a variety of birds such as parrots and cockatoos. This love and curiosity of aviary has led her to her current position at Wild Birds Unlimited in Las Cruces where she remains up to date with local wild feeder birds. Growing up in a home where animals have always been present, Ashley is now a self-proclaimed “Corgi Countess” due to her love and adoration for her tricolor Pembroke welsh corgi, Colin.  Bring up anything corgi or bird related in a conversation and Ashley will be happy to share her many photos. Feel free to ask her about pet birds, and visit Wild Birds Unlimited for questions on wild birds! Ashley can be reached at ashleygurnea@gmail.com.

One thought on “Budgie Buddies: The Tales of Budgerigar, the Common Parakeet- Part I”