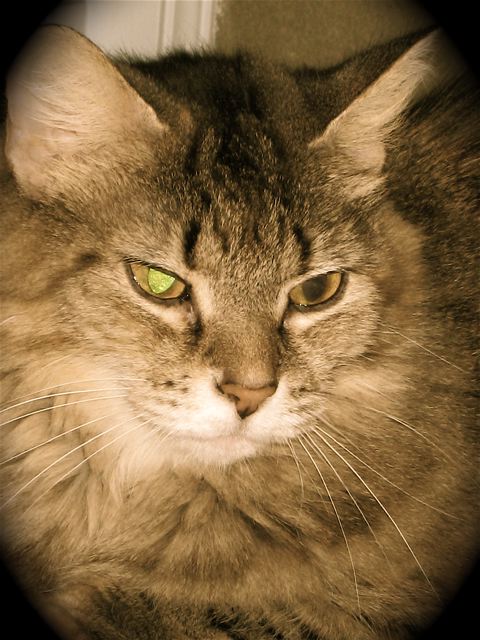 There’s an old saying my grandma used to live by: Each day is a blessing.  This idea is true for humans as well as animals.  Currently I have four beautiful felines in my life plus a couple of “grand-kitties”, one “grand-dog” and other assorted family and neighbor pet buddies. Animals make me complete, and I can’t imagine a life without my furfriends. I am blessed to be connected to such loving beings.

Auggie, named for the month of August when we found her as a stray kitten 15 ½ years ago, is no longer with us. She was a wonderful, willowy Maine Coon with stripes, swirls and tufts between her toes.

Auggie was a fairly low-maintenance and unassuming kitty. Even at the end of life, she made it easy because we never had to make a difficult decision about what to do for her. She passed to the Rainbow Bridge quickly and easily.

The evening before, we knew something was odd. She gave us signs that it was going to happen.  Auggie was mild-mannered and a distant kind of cat. She liked being in the room with people, but she wasn’t a cuddler. She was aloof anyway, but we sensed something else.

She dozed in unusual spots around the house, had no interest in eating or drinking, was lethargic and generally was oblivious, even when the drooling, dramatic and zealous grand-puppy came for a visit. There wasn’t much we could do on a Sunday night but be mindful of her behavior.

Just as she moved around in real-life, she passed swiftly and gracefully the next morning with my daughter and me close by. We even had my out-of-town daughter on iChat, so she could see and say her farewell too.

Later that week, when Auggie’s kitty ashes had been processed and returned to us, we planned a pet memorial service. Our other four surviving cats joined my husband and our kids in the living room.  (Anyone who owns cats knows you cannot MAKE one sit for a eulogy, but ours did.  They seemed to know and sat beside the discreet paper sack, which held a small wooden box containing Auggie’s cremains.) My husband read a brief bio of Auggie, and I read a poem I’d written about her. Then we went to our back yard into a private, tree-filled area, read Psalm 23 and gently spread her ashes into a hole I’d dug earlier that morning.  We also passed the small shovel and deposited dirt into the hole to give our Auggie a true “Mewish” funeral.

When the loss of a beloved pet happens, it has a profound effect on the humans and the other animals.  For us, planning a simple but meaningful service was necessary. It gave respect to Auggie’s not-too-dramatic yet influential life. It gave us a feeling of closure and accomplishment. Our remaining animals even had a chance to be present with all of us and process the loss in their own way.  After the memorial was over, we held our four remaining earthly kitties and assured them of our love and continued devotion.

Believe me, they understood. 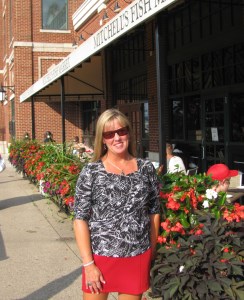 Paige Adams Strickland is the recently published author of, Akin to the Truth: A Memoir of Adoption and Identity. She is a Spanish teacher in Cincinnati, Ohio and is married with two daughters and a son-in-law.  She has owned both cats and dogs but currently has four cats.  Her book blog is www.akintothetruth.squarespace.com, and she welcomes visits and comments there. Her book is available on iPad, Kindle and as a print version at: https://itunes.apple.com/us/book/akin-to-the-truth/id711164304?ls=1     or: