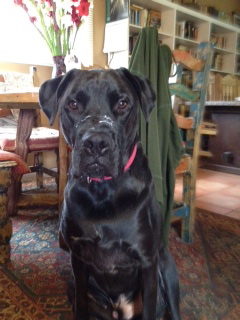 The author’s dog, Roy–with some yogurt on his nose!

The other day I had an appointment to meet with two directors who oversee social services for homeless communities. I am writing a novel about a homeless man, and I had contacted one of the two women to ask if she could spare an hour to go over a few details with me. We made an appointment, via email, for me to come to her home office, but she let me know in advance that she and her associate were incredibly busy, meaning, no doubt, there would be no room for idle chit-chat beyond my prepared questions.

I wasn’t exactly nervous driving over, but I always feel myself becoming somewhat “reserved” when I am meeting people for the first time, especially in a business setting. So when I rang the doorbell and the door opened and a scruffy little pup ran out and began to dance around my feet, I was enthralled. The ice cracked then and there. The dog’s name was Lucky. As the woman led me to her office, she explained that she’d rescued the dog, so he was lucky, but then so was she: luck all around. As if he knew that we wouldn’t have much more opportunity to talk about him once I sat down, Lucky jumped onto my lap, and he stayed there until the other two women and I were well into our conversation. I felt lucky too.

It’s always a treat for me to walk into a room for the first time and find a friendly dog (or two or three or more) waiting there to greet me. Well behaved or not, a wagging tail and lolling tongue can do a lot to put a stranger at ease. For dog lovers at least, encountering dogs in homes (or offices) informs them immediately that they have something in common with the humans in the scenario. Right away they can presume that these new humans are more laid back, less likely to worry about absolute cleanliness, less inclined to be outraged by a little barking, a cookie stolen from the kitchen counter, a favorite slipper chewed to smithereens. Let’s face it: Dogs are chaos, and some of us thrive in chaotic settings. 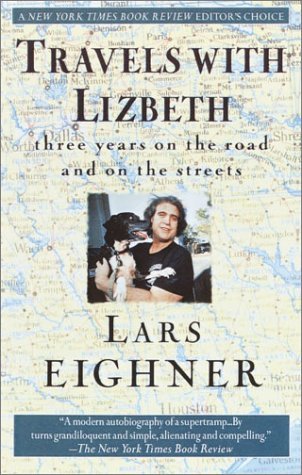 The sensations that engulf me (pleasure, warmth, familiarity) when I meet a dog in the flesh are only slightly more intense than those I experience when I turn a page in a book and find a dog panting there. One of my all time favorite books, for instance, is a memoir called Travels with Lisbeth: Three Years on the Road and on the Streets, by Lars Eighner, published in the ’90s. This is a remarkable story about the adventures of a homeless man who has lost everything else but relishes in the companionship of his dog, the Lisbeth of the title. The scene where she is taken away from him, for biting someone, is heart-wrenching. So as not to be a spoiler I won’t say how it is resolved (but rest assured, it is resolved).

Want To Read About a Highly Intelligent and Loving Dog?

Another favorite book about dogs, a novel published in 2009, is The Story of Edgar Sawtelle. Edgar, a child who is mute, is watched over by a highly intelligent and loving dog named Almondine. Edgar’s family raises dogs, so there are lots of dogs in this extremely well-written story, and if you love dogs, you will never want the book to end—certainly not the way it does.

These are two examples of books that are as much about dogs as they are about people. There are also, of course, plenty of books told from a dog’s point of view. Realist that I am, I don’t read this latter genre, though I know from fellow readers that there are many worthy titles within it. I tend to choose books, mainly novels, that explore the human condition or investigate mysteries that I have given thought to myself. Sometimes I will choose a book because someone whose reading tastes are similar to mine has told me it is extremely clever, or incredibly well written, or it has really snappy dialogue, etc. I don’t buy books because I expect to find dogs in them. But just as I am happy when I encounter a dog in real life, I’m happy to find them in the books I read too. 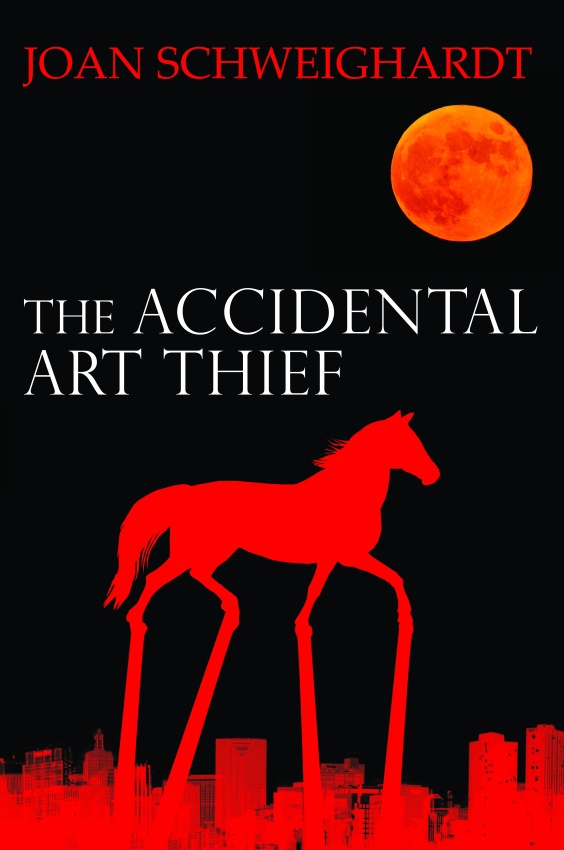 What a Really Old Dog Can Show About Character

I’m not talking about “dogs barking in the distance,” which seems to go on in lots of books. I’m talking about dogs that have names, personalities, dogs who carry on in the background while the human characters are working out their grievances at center stage, dogs who even work their way into the plot on occasion. Who can forget the really old dog sleeping on the porch in Robert Penn Warren’s All The King’s Men? When politician Willie Stark requires a humanizing photo in front of his family home, his men drag the sleeping dog into the right position, over by the rocking chair if I remember correctly. The gesture is so callus—and it tells us so much about the characters on hand in that moment. And who can forget the dog in Carolyn Parkhurt’s The Dogs of Babel (which, by the way, is a novel about grief, not dogs). Paul, a linguist, learns that his wife has been found dead under the apple tree in their backyard. Since their dog, Lorelei, was the only witness to the death, Paul decides he must teach Lorelei to speak. His obsession is less about believing he can really teach a dog to talk than it is about his urgent need to believe that his wife’s death was an accident and not a reflection of the state of their marriage. 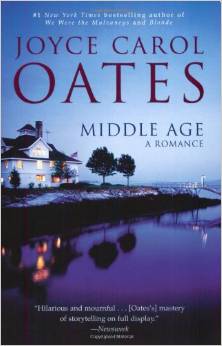 Not all dogs are well behaved in life, so I wouldn’t expect them to be in books either. When Lionel finally returns home after cheating on Camille in Joyce Carol Oates’ Middle Age: A Romance, the dogs Camille has been accumulating ever since Lionel’s departure attack him. I admit it; I cheered wildly over that scene!

Well Written Dogs VS Books From The Dogs’ Points Of View

If you Google “novels that include dogs” you will find the obvious ones, the books that are basically all about dogs or are told from the dogs’ points of view. Most of them will even have dog names in their titles. There are no lists (that I could find at least) that talk about dogs more or less in the background of stories otherwise about humans. In many cases these background dogs are props, there to give us a hint about the personalities or motives of the characters. But if they’re well written dogs, they will come to life anyway, just as the characters do, and add that certain je ne sais quoi to the story. And meeting them so unexpectedly can feel like a real stroke of luck.

Joan Schweighardt’s fifth novel, The Accidental Art Thief, includes three dogs, a German Shepherd and two mutts. It releases on May 15. You can keep apprised of the launch by liking the title at facebook.com/TheAccidentalArtThief.