It is with a happy heart that I get to report on the goings on at the Conservators Center as a part of our spotlight on animal organizations. So many things have happened there since I last wrote The Story of Several Servals back in March that I thought it was time for an update. The folks at the Center have been very busy fighting the wording of House Bill 554, raising funds for the summer care of their animals (who have been painting up a storm), and welcoming a new member to their animal family. Below is a quick review of what is going on with my favorite place to meet Lions, Tigers, Wolves… and now, a Coyote!

If you receive our newsletter, you might have seen that the Center was facing some serious concerns with a new bill (House Bill 554) which was intended to protect the public from harmful wild animals. The issue with said bill continuing the way it was written was that it would require many legitimate organizations to shut down and could have led to the euthanization of some animals. Places like the Conservators Center, Duke Lemur Center, and other wildlife sanctuaries open to the public would no longer be able to function under the conditions specified, since they give guided tours of their facilities in order to help raise funds to care for the animals, as well as to educate and promote conservation. After many polite emails to all the right people and much discussion of the bill on voting day, it was announced that the bill would be reworded and that the Conservators Center and other facilities with the same purpose would not be forced to close. There are still a few issues with the bill as it has been changed, mostly related to technical language and industry concepts that are hard to negotiate, but as it stands, the Conservators Center and many similar places around the state can remain open and active. If you wrote to your legislators, I thank you, and I know the Center thanks you as well.

At around the same time, a small pup was found along the side of a local road and taken in by some well-intentioned people who thought they had found a feral dog. At the first visit to their vet, they were in for quite a surprise when they discovered they had a small coyote on their hands. Sadly, because it can be easy to mistake a coyote pup for a coyote-dog cross or for a feral dog, the coyote had been taken into the home of humans and treated as a puppy would be and it was impossible for him to be re-released into his wild home. It wasn’t long before the Conservators Center was contacted and the pup was given a new home, with trainers and handlers who are used to working with wild animals. 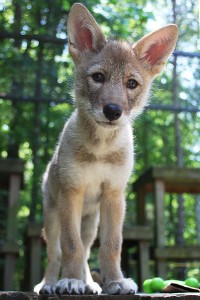 Sullivan as a pup. – Photo by Taylor Hattori Images

The Conservators Center had a naming contest for Sullivan as a part of their summer costs fundraising campaign and one lucky person who donated got to pick the perfect name. Over time, the Center has posted videos of Sulli playing and howling with his handlers. Regular followers on Facebook and Twitter have been able to watch him grow and there is certainly no doubt that this little guy is a coyote! Both playful and handsome, he has begun greeting visitors and is available for lifetime adoption. I cannot wait to get out and meet him next time I go through on a tour.

(The Conservators Center also gained another New Guinea Singing Dog named Mouse, as a friend for Tsumi, who had lost her companion earlier in the year.) 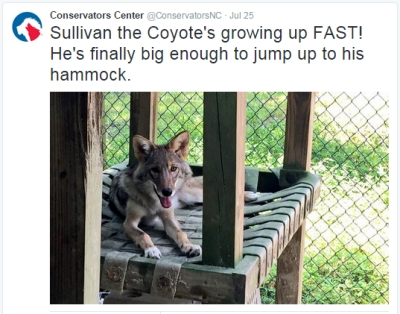 This time of year is comfortable for the lions and some other animals who live at the Conservators Center and are used to a warm climate, but for the tigers, binturongs, and others, heat is not a condition they would regularly be familiar with. It takes a lot of work and effort to help keep these animals comfortable in the hot summer months in the southern state of North Carolina, where we don’t just deal with heat, we deal with humidity and heat indexes that can get over 105 on any given day. This is a time when the Conservators Center needs a lot of help in the form of donations.

Money raised at this time of year helps to pay for things such as outdoor fans, wading pools, shade cloths and hammocks, water hoses and reels, pest control, and all the bills that go with constantly running fans and changing the water in wading pools several times a day. There are so many things the Center needs at this time of year that donations are a real, true blessing, and one of the ways they are raising money is by selling paintings…

From July 23rd through September 4th the Conservators Center is teaming up with the Alamance County Arts Council to produce an exhibit of over 50 pieces of art created by the animals at the Center. These aren’t just paw prints on paper, these are beautiful masterpieces, blending color and texture onto real canvases. How do they do it? The humans at the Center base coat the canvas with a safe tempera paint, let that dry, then add liquid paints enhanced with smells that the animals like (cinnamon, perfume, etc) and allow the animals to rub, sniff, and otherwise interact with the canvas as they would with an object in nature that stimulated their senses. Sometimes you get claw or tooth marks along with the prints from the fur, but that is all part of each animal’s interaction with their canvas. This is an enrichment activity that the humans are specially trained to administer and is fully enjoyable by the animals. No one is ever forced to paint and the activity has been going on for ten years now.

Typically the paintings go up for auction, but this year they are going on display, as well as being available for purchase through the Alamance County Arts Council. There are several pictures that were posted of this year’s artwork, but my personal favorite has to be “Introversions” by Ugmo Lion and Kira Lion. (I mean, come on. This is Your Pet Space, of course I’m going to show you artwork by a lion named Kira.) 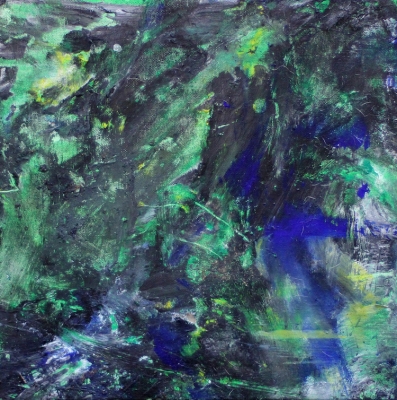 Description of the art and artists by the Conservators Center website:

Ugmo Lion and Kira Lion are different in a lot of ways. Ugmo is enjoying her golden years; Kira is still in the prime of her life. Ugmo was rescued from a negligent breeding facility in 2004; Kira was entrusted to the Center by a reputable zoo. They even live in separate enclosures, but they have one thing in common: both of them live with an extrovert! Ugmo’s roommate, Kiara, is a social butterfly, quick to greet her favorite human friends and receive endless amounts of attention. And Kira’s roommate—Arthur, a white tiger—is the star of the Conservators Center. But Ugmo and Kira don’t mind. Most of the time, they can be found lounging in the back of their enclosures, looking on with soft smiles as their bright, unreserved roomies ham it up in the front. This painting is an exploration of the joy of introversion: the luxury of resting quietly in dark shadowy places, with no pressure to perform or act outside of one’s nature—and how wonderful it is to know you are just as valued and adored as your more gregarious counterparts. 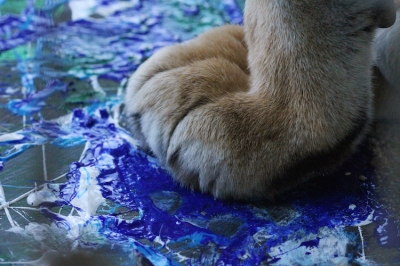 The last of the major events that has happened at the Conservators Center was a surgery for Kiara Lion, who was slowly changing in her old age. Her temperament wasn’t what it used to be and the folks at the Center requested the help of Dr. Doug Ray from the Animal Hospital of Mebane. With the help of students from the North Carolina State University College of Veterinary Medicine, Dr. Doug performed a spay and exploratory surgery in order to be certain that her hormonal imbalance could be corrected and her emotional state set to the right place again. 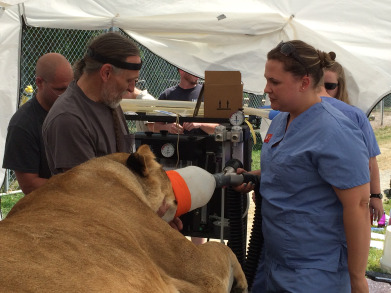 Doug teaches Sarah about the anesthesia machine. It was donated by a dedicated group of Lifetime Adopters who wanted to ensure good surgical outcomes for our geriatric residents, who are the most at risk when we must administer anesthesia.

This is yet another example of the wonderful opportunities that the Conservators Center makes possible for education and outreach. It is because of this wonderful group that the Carnivore Team at NCSU were able to participate in a big cat surgery, and it is because of this same group that members of the community get to meet Kiara and all of the other animals that would normally be so far from us. For these things and so much more, many members of the animal kingdom and animal lovers everywhere are forever grateful.

The full story of Kiara’s surgery can be found on their website.

All images and image descriptions are used from the Conservators Center website, with permission on the condition that we give credit to photographers as was noted.