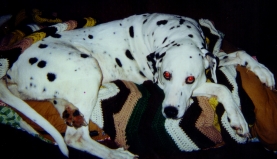 Many years ago I  fell in love with a cat at our local animal shelter.  He was a rescue who was very affectionate and very different.  With his long face and light coloring, he was more than just the typical mixed breed commonly found in shelters, the cat was stunning, and many who met him for the first time couldn‘t help but say, “What an unusual face!”  We picked the name Sekhemkare for him, due to his somewhat Egyptian look, and he came home to discover he had a new animal sibling, an aging Dalmation named Deanna, who wasn’t altogether certain what to do with a feline inside of the house.  He was young and full of energy, she was tolerant and occasionally interactive, but mostly they ignored each other and after many years of this situation, Deanna passed away, leaving a large hole in our hearts and making Sekhem the only large animal in our household.

As humans, we are typically devastated at the loss of a pet and we all know that we deal with loss in many ways.  Some people rush out and fill the empty cage, tank, or dog bed right away because they can’t stand the silence, while others take their time to let the wounds heal.  I was one of the latter, but I knew that there were other animals in the house that had been used to having Deanna around.  I gave the cat, rats, and even the fish lots of extra attention, and used that extra love to help ease my own pain.  I was certain that it was enough because other than occasionally looking a little lonely, everyone seemed content.

We suspect that Sekhemkare is a victim of animal abuse.  The shelter knew little about him, other than that he had probably been abandoned.  Cats are skittish at times, but he was even more so, jumping at the slightest sounds, and being terrorized by brooms, moving or motionless.  He was petrified by storms and hated the outside world in general.  The first few raindrops on the roof or a gentle gust of wind against the building were guaranteed to send him crying out in mental agony from his hiding place under the bathtub, where he would remain for days.  All of these things didn’t make going to the vet very easy.

But when the time comes, you’ve got to get that annual appointment in, so we would get out the crate and soldier in with our cat.  For several years, though Sekhem was healthy, something seemed off.  No one could place it, but he just wasn’t quite himself.  There was no illness, no physical symptom of any kind, but his anxieties were getting worse, he would disappear under the bathtub for weeks and he was beginning to get raw patches on his back.  We were all worried. He was taken to NC State’s Veterinary School where he tested positive for allergies and we were given the appropriate shots to administer to prevent allergic reactions, but he was not recovering.  Eventually, I discovered the reason for the sores: Sekhem was ripping out his own fur.

Could my cat really want a dog?

This, of course, had to stop.  But how?  Desperate for answers, I took our cat to our regular vet, to discuss the use of anti anxiety medications.  We were put in a room and I let Sekhem wander, trying not to pace and fret the way he was.  There had to be answers and we would find them.  I was certain.  I calmed myself and then suddenly realized that there were no sounds coming from my cat.  My head snapped in his direction and a wave of shock hit me as I took in the unusual sight of my feline friend, calm and collected in a strange environment, staring out of the floor-to-ceiling window, seemingly entertained by the outside world.   Behind the glass was a family.  And their dog.

Could my cat really want a dog?  He hadn’t acted all that interested in Deanna, they weren’t into snuggling or sharing beds or anything like that, and mostly he stayed out of her reach.  Testing my theory, the next time my landlady asked me to go next door and check on her dogs, I had them walk home with me for a while.  She has a large Black Lab who took to Sekhem right away because he had grown up with a cat in the house.  The anxiety attacks didn’t stop, but Sekhemkare did start to look forward to the visits and would come out of hiding if I brought this new friend to visit him.  I had won a major victory.  Buster the Black Lab began making frequent visits to my house and even spent the night now and then, when no one was home at his place.

Problem solved?  Not exactly.  There were still some sore spots that needed to be cared for which meant one more visit to the vet, where Sekhem began reaching out of his carrier to touch the dog in line ahead of us. I was politely told that my cat was trying to scratch the dog, to which I smiled and said that he was used to dogs and was probably trying to pet him.  “He wants a dog,“ I said.  “We used to have one, but she died and he’s been begging us for another one for years.“  As I moved back out of respect for those concerned, curiosity got the best of everyone in the reception area.  One of the staff had her dog there with her for the day, so she brought him out to test my theory and sure enough, Sekhem began to rub at the bars of his carrier, reach out to pet the dog and purr loud enough for half the room to hear.  From that moment on I knew that I had to spend less time thinking of my own sadness and more time thinking about the cat’s feelings.  There was no denying it.  Our cat wanted a dog and less than a year later he had one. 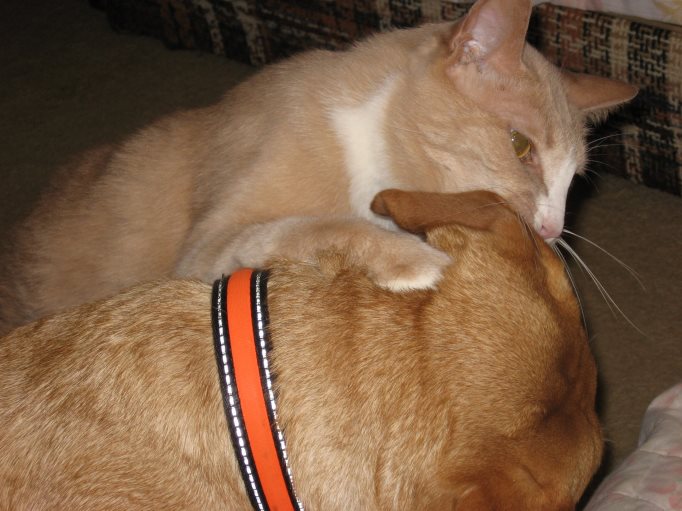 The day we brought home our Corgi-Lab mix from a local animal rescue organization, the roles were suddenly reversed.  Sekhemkare was in his early teens and Sahara, the new dog, was only three or four.  This time it was Sahara who was recovering from animal abuse, leaving a horrible situation for a new start.  She was skittish, uncertain and afraid, and the cat could recognize that.  He could also recognize that she wanted to run and play with him, which were not  the qualities he had become used to in a dog.  The situation was a little touchy at first, but once Sekhem realized that Sahara was here to stay, he began hovering near the entrances to whatever room she was in and slowly, over the period of a few months, they learned each other’s languages.  Now, when Sahara goes outside, Sekhem waits faithfully at the door for her to return, braving the dangerous world to keep her in his view, and there is a daily improvisational play time that usually starts with the gentle swat of a tail or a slobbery lick on the head.  Best of all, there haven’t been any sores on his skin in the year and a half since we brought Sahara home.

The moral of this story?  Always be willing to listen to your pets.  You might not speak the same languages, but like dogs and cats, we can eventually work out the signals.  We now have a happy, healthy cat who has completely given up chewing on his skin and hiding under bathtubs, and all it took to get there was listening to that childlike voice: “Mom?  Dad?  Can I PLEASE have a dog?”

Mirrani Houpe has had rats since she took home her first little boy once they both completed the second grade.  Since that time she has purchased, rescued and bred many kinds of rats, from many backgrounds. She may not be a vet, psychology major, or scientist, but her babies have her very well trained when it comes to how to care for them.  She is constantly working with her family’s veterinarian to come up with new and innovative ways to love and care for the most often misunderstood rodent in the pet world. You can e-mail her at mirrani@earthlink.net.