Lots of people equate “animal rescue” with the simple act of saving a dog or cat from euthanasia at an animal shelter.  However, there are many facets of rescue including adopting, fostering, transporting, fundraising, and advocating.  All areas of rescue are important, and combined efforts enable employees and volunteers in the rescue community to save lives.

Advocating on behalf of animals is also varied.  Most people involved in rescue are happy to preach “Don’t breed or buy while shelter pets die!” to anyone willing to listen.  Others tackle the issue of animal cruelty, and unfortunately rescuers are all too often witness to its victims.

Beginnings In a Fondness For Animals

My path to animal advocacy began early.  As a child I was innately drawn to animals and always loved them.  I had dogs as pets growing up.  Fortunately, I am married to someone who shares my fondness for animals and for many years we have had dogs and cats as part of our household.  For a long time we have been proponents of the “adopt, don’t shop” mantra, and we support our local humane society with financial contributions when we can.

My “official” leap into the world of rescue came as the result of an animal cruelty case.  In December 2011 a young female pit bull was found abandoned and in terrible condition at Joyce Park in Fairfield, Ohio.  She weighed only 27 pounds and had pressure sores over the bony protuberances of her frail body.  The first temperature reading obtained after she was rushed to a veterinarian was a mere 91 degrees, (normal is 101-102 degrees).  Her feet were so swollen and infected from being confined in wet, dirty conditions that she was unable to stand.  She also had scars from old wounds on her body, the causes of which would never be determined.  Her saviors named her “Audrey”.

I learned of Audrey’s story on the local evening news from the warmth and comfort of my kitchen table while I was having dinner.  I was overwhelmed by the vision of her struggling, skeletal form on the television.  I was also shocked.  Joyce Park is less than 3 miles from my home.  I couldn’t imagine someone leaving this dog to die “right in my back yard”.  I was angry.  When I learned that the perpetrator, if caught, would only be charged with a misdemeanor I was positively enraged, and an advocate/activist was born! 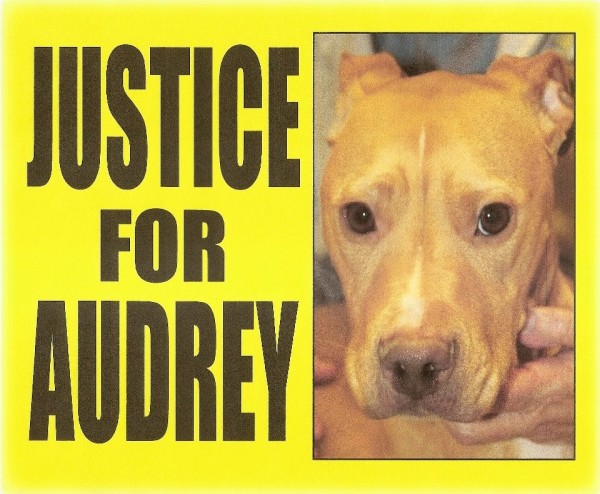 Sadly, after Audrey, other stories followed locally.  One such case was that of Bruiser, a 10-month old pit bull mix puppy who was starved to death by his pregnant 19-year-old owner in Hamilton, Ohio.  Then there was Joseph the German shepherd.  He had been tied to a tree in a backyard in Middletown, Ohio for up to 4 yrs.  He was emaciated, heartworm positive and had horrible chronic ear infections when he was rescued.  I attended courthouse rallies, wrote letters, placed phone calls to judges and state legislators, and met lots of other animal lovers in the process.  Each case only served to strengthen my resolve to “DO SOMETHING!”

Today I am on the steering committee for Ohio Voters for Companion Animals, or OVCA.  The organization was formed in January 2013 and is an Ohio-citizen driven, community based organization dedicated to increasing the engagement of the Ohio animal community in public policy.  We strive to elect officials who believe that all companion animals should be treated humanely.

OVCA’s focus is on grassroots engagement to influence legislation to improve Ohio companion animal-welfare laws.  We would also like to educate and support the law enforcement and judicial communities in the enforcement and administration of Ohio’s animal welfare laws.

OVCA firmly believes that a critical step in achieving its goal of eliminating cruelty to companion animals within Ohio is to elect candidates who demonstrate an understanding of the issues and support policies to address and criminalize deliberate acts of cruelty.

We have an active face book page which to date has garnered nearly 10,000 “Likes”, (https://www.facebook.com/pages/Ohio-Voters-for-Companion-Animals-OVCA/476497349080766), and a comprehensive web site (ohiovotersforcompanionanimals.com).  Our focus is on tracking companion animal legislation in Ohio, although we sometimes also look to other states for examples of good legislation.  We follow many ongoing cruelty cases throughout Ohio to monitor what kinds of sentences judges are handing down with guilty verdicts.

OVCA makes lobbying easy for the novice.  We help to educate you on the legislative process, and we can assist you in identifying who your legislators are.  We even give you tips on what to say when contacting a Senator, Representative or Committee Chairperson.  Lobbying for a cause you believe in does not have to be daunting or intimidating! 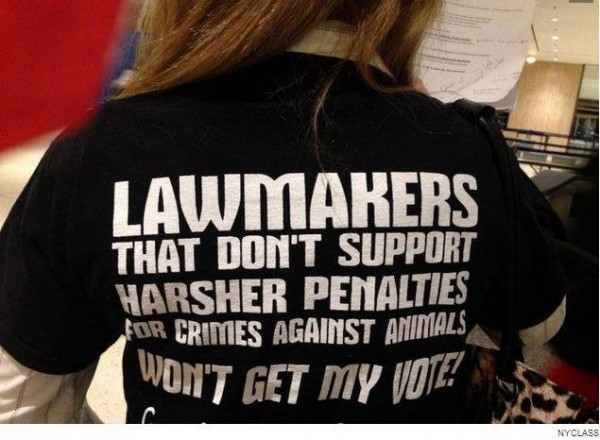 The following bills are currently pending in the Ohio legislature:

1. HB 57 would require an individual to file proof of successful completion of training with the county recorder prior to being appointed as a humane society agent and to require the revocation or suspension of an appointment under certain circumstances.

4. HB 310 would revise current law to include persons diagnosed with post-traumatic stress disorder as mobility impaired persons for purposes of the statutes governing assistance dogs and to prohibit misrepresentation of a dog as an assistance dog.

6. SB 217 would require the State Veterinary Medical Licensing Board to inspect the place of business of a person that is licensed, registered, or permitted under the Veterinarians Law and would establish requirements and procedures for those inspections.

OVCA will be closely monitoring the activity of these bills at the Ohio Statehouse. You can stay up-to-date by watching for information or “Action Alerts” on our face book page. You can also sign up for email alerts at our web site.

Please join OVCA on the quest to better the lives of companion animals in Ohio. Channel anger about animal cruelty into something positive and be pro-active in demanding change. OVCA aims to become a strong citizen based lobby at the statehouse, one that will help control and influence companion animal legislation in Ohio. Your participation is vital since the more members we have, the more influence we will have with Ohio legislators.

Advocacy is an oft overlooked but important piece of the rescue puzzle. It simply takes you caring and speaking up to be successful. Make sure our legislators can hear you! 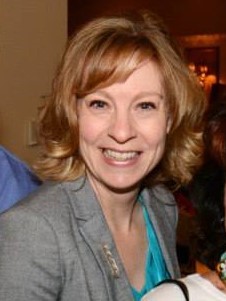 Lisa Holbrook is a Registered Vascular Technologist (RVT) at a community hospital in suburban Cincinnati. She lives with her husband Bryan and fur-kids in Fairfield, Ohio. Besides being active in companion animal advocacy, they foster kittens for Animal Friends Humane Society of Butler County. You can contact her at lisa@ohiovotersforcompanionanimals.com.