Walter: The Story of a Rat

This is a book that I have seen many times, but have never picked up. Typically I jump at the chance to read about rats who aren’t portrayed as nasty vermin, but for whatever reason, I have waited years to pick up this book and dive in. This month, at my local library, I found a copy next to one of the books I had come to check out. I fell for the dramatic and beautiful illustration on the cover, depicting a rat looking at words on a wall. This was different from the unimpressive image I was used to seeing on this book: that of a rat standing awkwardly while holding some kind of food to his nose. While the cover art of the latter copy had turned me away, the more realistic looking image of the rat had pulled me in. I reasoned that any book willing to visually portray rats this way must be worth the read. 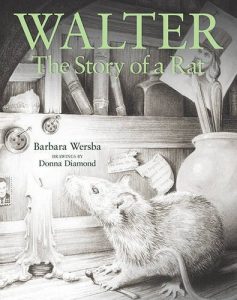 The lovely, updated cover of Walter

How It All Began

Finding a decent work of fiction that shines a good light on rats is often quite difficult. Many people who write about rats this way are doing so because they are desperate to change the opinions of the readers. You have to use some persuasion, really, since most of the people out there in the world are told that rats are filthy, disgusting creatures that are something to be fearful of. We watch them squeak through wet sewers and terrorize humans at every turn in most of our media encounters with them, and we are constantly being reminded that rats bring disease. Mice? Though they live in mostly the same conditions in the same parts of the world, we seem less bothered by their image as cute little heroes. Why do we humans connect with mice and not rats? They look similar, behave in a similar manner, and are both considered pests. This preponderance is actually a large topic within this book. I wouldn’t say that I enjoyed the way it was handled, but we can come back to that later. 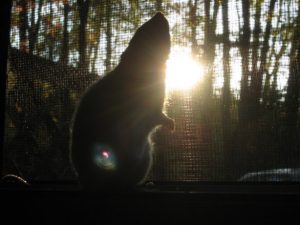 Basking in the sunshine.

Walter, a highly unusual rat, realized one day that he could read and named himself after Walter Scott, a Scottish historical novelist. He finds himself in the home of author Amanda Pomeroy and lives with her, sharing space but not companionship. They are both loners who enjoy a quiet life that has come with age. Walter knows this human is an author, but only stumbles into her collection of published works after many years of browsing her bookshelves at night. He is shocked to discover that her books are all about mice. At first this is unsetting to him, since he has lived with her all of this time and takes offense at the notion that mice, yet again, are the heroes of the day when rats could just as easily have been in that role, but over time his attitude softens and he decides to confront the author about her choices. The two begin communicating through a series of notes left in the author’s study. 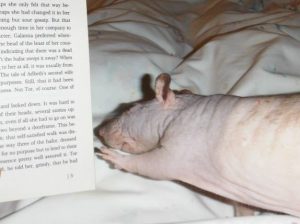 The target audience for this book is readers aged 9 to 11-years-old, and, for anyone in that category, the rapidly-developing, oddball mash up of the character that is Walter must be something mysterious or entertaining. As an adult reading the book, I found it to be completely frustrating. This is basically a fantasy short story, not giving time to develop the history of any one specific character with any type of depth, but that doesn’t excuse the author from creating one large befuddling mystery. Did Walter’s parents escape from NIMH? All we know is that suddenly he realized that he could read, which certainly sounds familiar enough to fans of that rodent epic. Was there some kind of magic involved? The off-handed way in which Walter’s ability to read was tossed out at the audience was very poorly managed and off-putting to say the least, but I trudged on through all of it and through the multiple and frankly unnecessary references to various authors along the way. Okay, we get it, this is probably a list of the author’s favorite authors. Moving on…

Most of our introduction to Walter beyond his reading genius falls into what I mentioned before about authors having to convince readers that a rat is worthy of being the sweet, loving hero of a book. Rats are clean, intelligent animals, even without magical reading ability and there is no way that a reader can forget that as they trudge through the first few pages, which were more of a lecture on rats than they should have been. More time should have been taken to plot out Walter’s backstory than to explain to readers how rats live. And for goodness sake, if you are going to be telling truths about rats to encourage readers to like them, why would you make Walter a cannibal, introducing him as a rat who ate his own siblings? I can not tell you how out of place that felt in among all of the other “rats are good” statements that I was bombarded with while I should have been enjoying a story. Rats fight with one another, yes, but I have never had a single rat eat their own child or sibling, and I have had well over a hundred pet rats in my lifetime. This isn’t to say that it does not happen, but is it worth pointing it out to young readers? How did this statement develop his character? These are things I could never figure out.

The Moral of the Story

I am, admittedly, being overly critical here. I do appreciate any author who puts rats out there in a way that is supportive or kind, and rather than put the book down I continued reading to discover that once you push past the first pages, this is actually a very touching story. Where I had grumbled in frustration at the beginning, I swooned at the end, remembering all of the rats I’d had as pets in the past and wondering if they could ever have seen me in the same light that Walter saw Amanda. The fantastical notion of Walter’s ability to read faded into a more realistic feeling as he communicated with his new friend and we discover things about her that we might not have known or expected before. 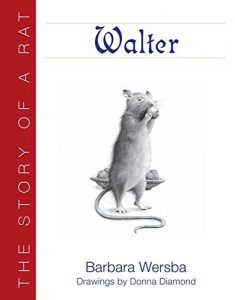 The original cover of “Walter: The Story of a Rat”

In the end, though it feels literacy and rat knowledge are somewhat forced upon the reader, this is a story about being alone and finding companionship where you may or may not expect it. It is a good lesson for young readers and a respectful book to rats themselves. I am glad that I didn’t let the awkward nature of the writing impede my completion of the story, or I would have missed out on something sweet indeed. I wouldn’t say it was one of my favorite rat books of all time, but anyone looking for a decent book that highlights the best part of a rat’s nature should pick this one up and enjoy it.

Published in 2012 by Boyds Mills Press 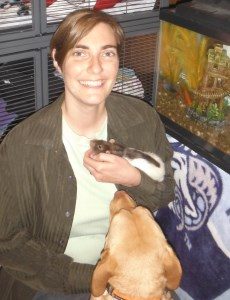